So, just this past week I dropped a whole bunch of blog content ideas on my personal Facebook wall and asked my friends which they’d like to read most. The overwhelming consensus pointed to me writing more about my recent feelings of greyromanticism and preference for queerplatonic partners and friends-with-benefits dynamics in my polycule [more on that next week] but then my partner Raven pops into my inbox with this gem: 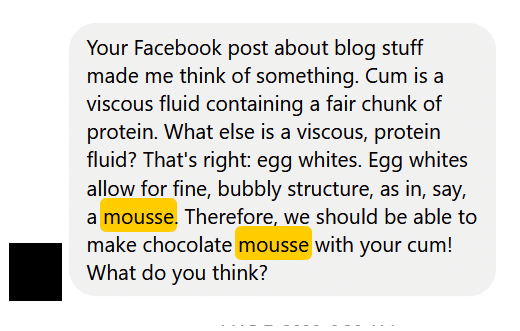 You know what’s frustrating as fuck though? There’s practically NOTHING out there that adequately explains the means by which you can store your semen for culinary purposes, so, it was up to good ol’ fashioned trial and error.

A LOT of fucking error.

Oh well, when I told Raven they assured me it was enough and explained we’d just mix in what I had with some egg whites. With that reassurance I watched excitedly as they followed a recipe for Rum Chocolate Mousse, which consisted of chopping up and melting some 60% dark chocolate, preparing some homemade whipped cream, reducing a mix of rum and sugar in a pot, drizzling my semen into a bowl of egg whites before beating them into a thick foam, then mixing it all together into a beautiful, delicious mousse.

Then we had to refrigerate it and wait…

The wait was fucking excruciating! 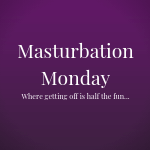