I’ve seen a bunch of bloggers doing this thing where at the end of each month they talk about all the stuff they did, or they share interesting things and stuff, and I thought: “hey, I can totally do that!”

Like The Bioshock Collection coming out which was, honestly, one of the biggest big deal things for me personally this month. Because, Bioshock is incredible. That’s just science.

Anyway, let’s do this!!! [Be sure to read all the way through to the end, where I’ve included a sexy selfie for the month!]

NOTE: On November 24, 2016, my original blog was permanently suspended by WordPress because of their anti-porn and anti-sex work policies. Due to this, all of the blog links below are no longer functional. But, some of the below posts have been rescheduled for future Thursday updates!

My partner hand drew me an AWESOME new banner to use on this site and social media. She’s gonna digitize it soon and make a few final alterations before it gets a full launch but I am stoked and so thankful for the work. Love you, hun!

– I had a lot of posts planned out earlier in the month but some personal matters and other obligations kept me from getting to even half of them. I did manage to post a few, though!

– I finally sucked it up and made a Mx Nillin Facebook page to expand my reach on social media. Be sure to like and follow it to keep up on new blog posts, to hear about my current work at the Center for Sexual Pleasure and Health (CSPH) and Crash Pad Series, and for the occasional sexy selfie.

A lot of you likely already know, but it’s still super exciting so I’m gonna talk about it again anyways! Last month ended with me finishing a two-day training program for a distance internship with the Center for Sexual Pleasure and Health. I’ll be with them for the next couple of months, until December 9.

Honestly, it has been a little challenging to feel like I am a part of things, what with being all the way in Saskatchewan, Canada while they are in Rhode Island. BUT, I have made a conscious effort to connect and socialize with my fellow interns, as well as CSPH staff, on social media and this really cool message board system called Slack; which has helped immensely with making me feel more involved.

So, yay for meeting so many new, really cool people!

In terms of workload, it has been really manageable and I’ve already been able to contribute a fair amount of writing.

I’m not sure if ghostwriting is something that I would feel comfortable doing very often, unless it paid really well, but I was happy to help out and I learned a lot!

Coming up next: tomorrow, October 1, I’ll be taking a 3-hour “Jumpstart Your Career in Sexuality” webinar.

– It’s an unfortunate reality for many queer and trans people that they may be disowned, cast out, and/or generally degraded by their own family after they come out. Unfortunately, that’s where I’m at. I had to make the hard decision to cut out anyone who is toxic, disrespectful, cruel, and unsupportive of me, my partner, and my life. Even if we are related by blood. No more deadnaming, no more misgendering, no more putdowns, or disparaging comments, or mocking remarks. Luckily, I have countless loving, caring, enthusiastic, and positive people that surround me here in my day to day life who I am immensely grateful to know. Family isn’t always blood. Sometimes, those you need most in your life are your close friends, peers, and fellow queers. I love you guys, thank you for everything!

– After a friend shared their secret (and unbelievable hot) Tumblr sex blog with me (you know who you are you magnificent creature xoxo), I couldn’t stop thinking about my old Tumblr sex blogs where I used to drop my lewdest of nudes. I REALLY had fun on Tumblr… letting my slut flag fly unrestrained was super empowering, exciting, and just generally a lot of fun. I actually thoroughly regret having deleted them, especially for what now feels like the wrong reasons. Boo. Lesson learned.

– Earlier this month I quietly resigned as Chair of the Board of Directors for Moose Jaw Pride. It honestly just came down to feeling as though my values, interests, and goals no longer aligned with the organization, and feeling that I was needed elsewhere. So, it was time to move on! I’m looking forward to really giving attention to my passions surrounding pleasure inclusive, queer and trans focused sex education.

Now, let’s talk about my glorious ass. My partner Falon took, what I strongly believe, is the SEXIEST picture of my booty that has ever been taken. I feel that it’s important to start this off with a sexy selfie because it honestly makes me feel bangin’. So, that’s reason enough for me! 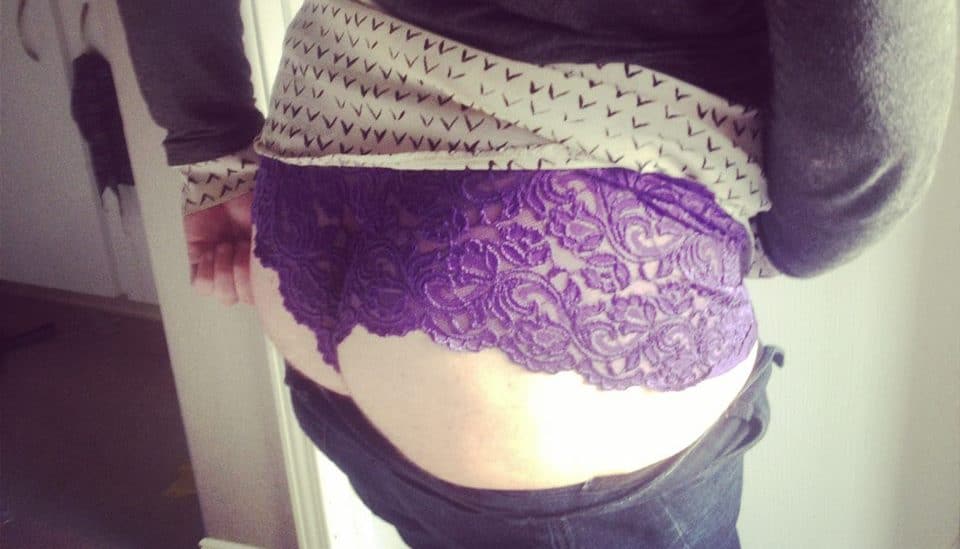 [Okay, technically, she took the picture on, like, August 27th but I’m sharing it here because I look fuckin’ hot.]

Speaking of hot pictures, I gotta give a shout out to a new friend and inspiring peer, Taylor J. Mace from Feisty Fox films, who was super cool and let me send them a bunch of my nudes and offered really great advice on how I could step up my sexy selfie game. Looking forward to playing with a lot of those tips and critiques over the next couple of weeks and seeing what comes out of it!

Thank you for reading and following all of my content, everyone! See you next month!