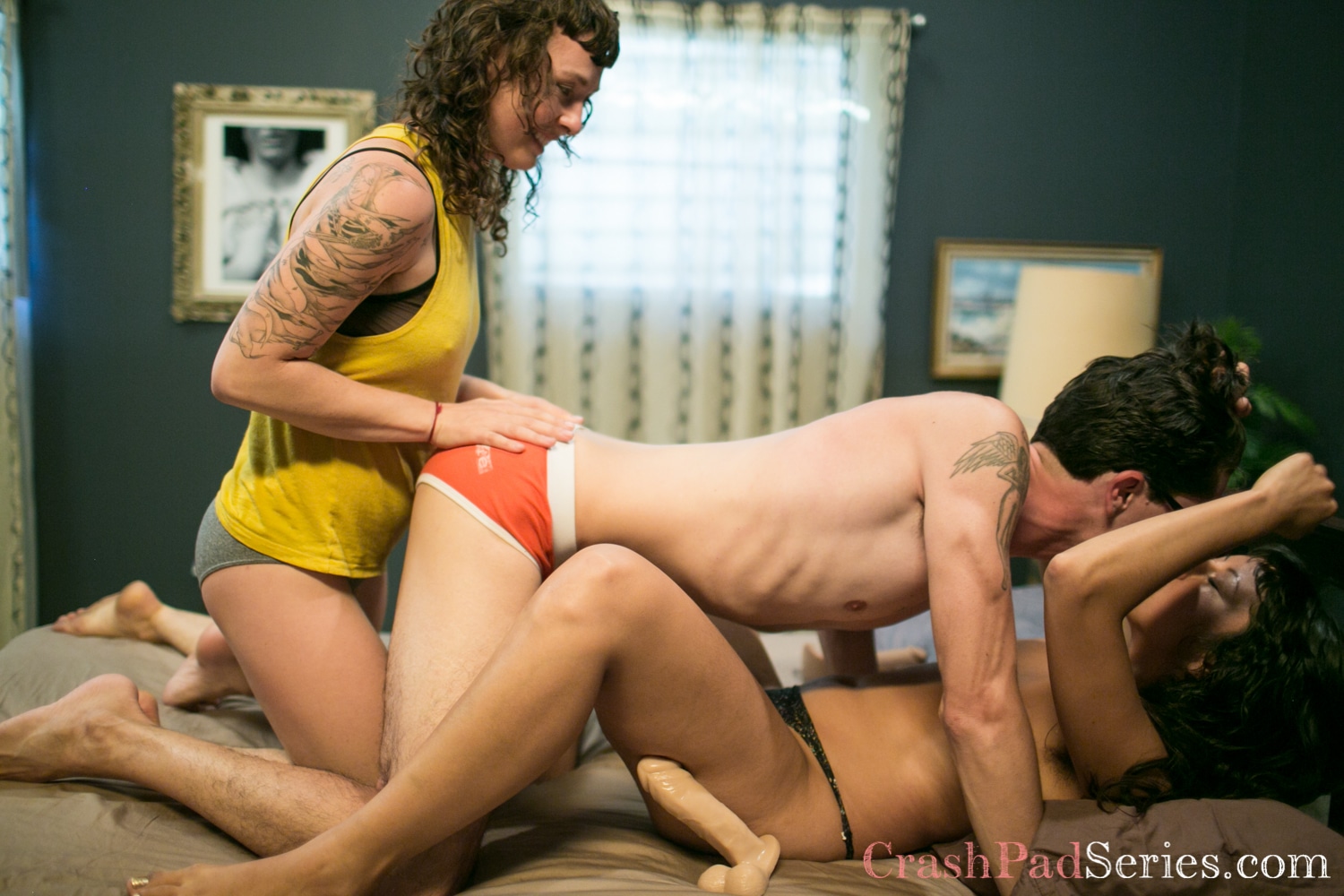 How we made it work for us:

And this was really fun, for sure! Problem was though that we’re all very different body types and sizes, we’re not very limber, and we all got joint pains which made it pretty awkward trying to get it on exactly as seen above.

Instead, Fal laid on their back, with Kate on top of them, then they shuffled their booties to the end of the bed so that I could fuck them while standing. That worked WAY better for us all, and it was hot as fuck.

But more on that in just a moment, first things first:

FUCK yeah, it does, and there’s so many ways to alter the move so that it works for you and your partners and/or lovers. For example, instead of two people positioning themselves in a stack for the third, they can instead both lay side-by-side on their backs, like this:

As for how it felt… it was fucking mind-blowing! Seriously. Looking down to see Kate with her legs spread, straddling Falon, the two of them making out and quivering excitedly in anticipation of who was going to get my girl cock first, was so fucking amazing. Then fucking Fal deep and hard, hearing my pubic mound slapping against their wet pussy as they gasp in pleasure, only to pull out and immediately start fucking Kate, mixing all of our juices together inside of her… I mean, holy fuck, right?

Don’t just take my word for it though! Here’s what Fal and Kate had to say:

Fal – Not only was this position hot as fuck, it was also super gender affirming. Feeling Kate riding me as Nillin fucked her from behind felt strangely like we were both fucking her. It was bizarre and incredible and entirely unexpected.

Also, feeling Nillin between my thighs, but not fucking me did crazy things for my lusty, submissive side. So when they did thrust their girl cock into my dripping pussy, with Kate sandwiched between us, I came almost instantly. Tbh, some of the best sex I’ve ever had.

Kate – I liked a lot of different aspects of this position. I didn’t really know what to expect because based on the drawings and descriptions I saw it could be really awesome, or really awkward. It ended up being really awesome!

It was a really different experience being fucked between my partners while they were fucking too. Like, I was a part of the action in a way that just isn’t really possible in other positions where one person is being penetrated.

I agree with Falon when they said that at times it was almost like Nillin and I were both fucking them together. And then when Nil fucked Falon with their girl cock, and me with their fingers at the same time, that was fucking awesome!

So, yeah, it’s a unanimous 10/10, would double dip again, and I recommend that you do too if you get the chance!

Thank you to CrashPad series for allowing the use of photos in this post, and for the feature image.