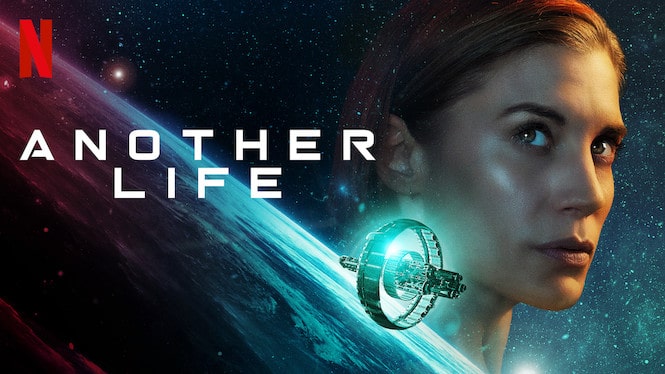 Okay, so, I feel compelled to talk about this show on Netflix called Another Life, about a crew sent out into deep space to make first contact after a UFO visits Earth and leaves behind an alien artifact, that dropped just yesterday, on July 25th. Which is super rare for me because I don’t talk about a lot of film or television here at all (as soon as you start writing about pop culture and fandoms as a queer person it tends to bring a lot of hate your way).

But I just gotta talk abut this show because it is getting fucking bombarded with queerphobic and transphobic user reviews and comments on IMDB, as well as other review sites, that I hope to counter balance a bit.

Cause it really sucks that every time we have a show like this we have to go through the whole thing of hearing about how much guys hate LGBTQ+ people and representation in their cheesy genre shows.

Seriously, if you go through all the angry reviews with low scores on IMDB, a trend quickly appears: a LOT of very bitter fandom nerds hate how chock full of “millenials”, “leftists”, the “SJW agenda”, and visible minorities that the show has featured in it’s central cast. For example: I can’t even begin to tell you how many reviews, even in the ones that are only a couple of short paragraphs, users make a point to zero in on performer JayR Tinaco as Zayn, the show’s fucking awesome gender nonconforming ship doctor, with demeaning or dismissive remarks about hir appearance.

So, I’m hoping that some of y’all will do me the favor of giving it a shot! Because believe me when I say that Another Life  has some of the BEST queer and gender diverse representation in a space exploration series that I think I’ve ever seen. I mean, not only is Zayn cool as fuck but so is Chief Engineer August and her two partners, Oliver and Javier, who are ALL THREE romantically and sexually involved with each other.

And there’s more than those I’ve listed above too! I’ll leave the rest for you to discover though, just know that the representation was all pretty cool for a polyam andro-babe like me.

As for the show itself, it’s fun!

Sure, it’s overflowing with sci-fi tropes and clichés, is predictible, suffers from a bit of an identity crisis, some of the character development is clunky, and ultimately plays things a little too safe with it’s source material, but you know what? Fuck it, it was fun. I watched the whole thing with my partner and we enjoyed it a ton.

The middle-ish episodes were definitely more our jam. We really loved episodes 2 through 6, all of which had some really cool sci-fi horror vibes, dealing with things from space diseases through horrific first encounters, and drew a lot of inspiration from films like Event Horizon  (1997), Annihilation  (2018), Life  (2017), and Pandorum  (2009). That’s not to say that the later ones are bad, just that there is a clear tonal shift we kind of wish wasn’t so jarring.

There’s a lot of potential here though!

Unfortunately, knowing Netflix’s track record with giving up on anything with LGBTQ+ diversity in it I’m sure the fate of Another Life  is already sealed to a quick cancellation, which sucks because of how much the negativity is laced with ignorance and bigotry for the diversity on screen.

But I genuinely hope y’all will ignore the more vitriolic shit out there and give it a go like I did then please put some positivity out there too.

I imagine I’m far from the only queer person who is having a real hard time seeing so many assholes using their “opinions” of this show as a vehicle to spread bigoted, demeaning sentiments about people like us.

The ignorant negativity is bullshit. This show is great, and so are badass, hot, space queers!

Another Life  is streaming now on Netflix.