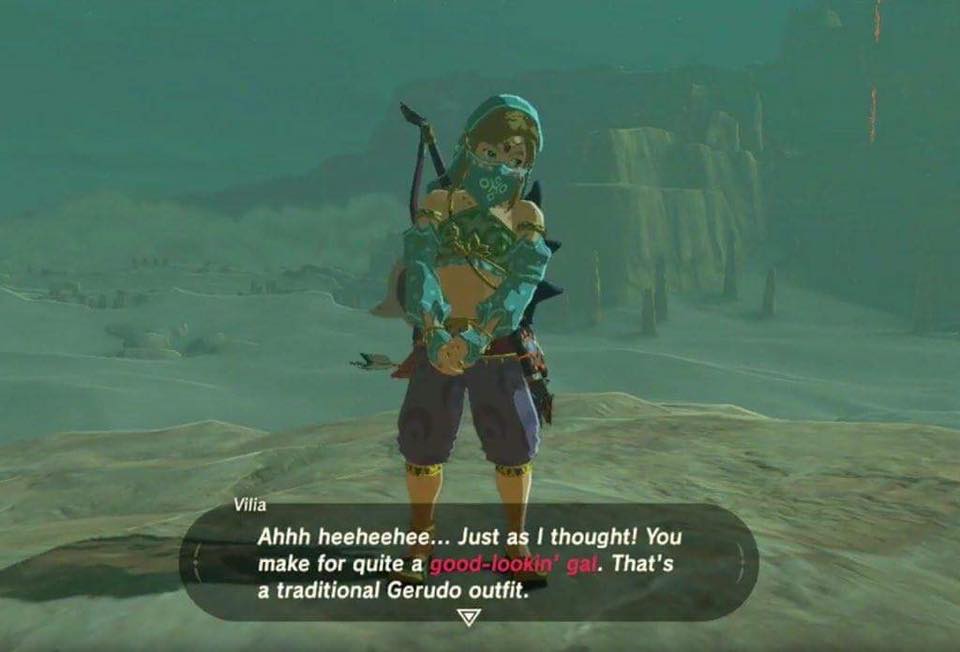 If you play video games and read about video games then it’s pretty likely that you’ve already heard about “Gerudolink” [or “Gerudo Link”] by now. For those not in the know, here’s the run-down: Link, the main hero from the Legend of Zelda game series, crossdresses as a Gerudo (a warrior woman) during the latest game in the series, “Legend of Zelda: Breath of the Wild”.

Completely unsurprisingly, “gamers” [aka, a bunch of triggered cis dudes], are losing their shit about it as streams of homophobic and transphobic trash comments are strewn all over social media and the comments sections of most articles.

But you know what, cis boys? Too fucking bad! It’s canon now. And Link looks hot as fuck dressed all fem and pretty. 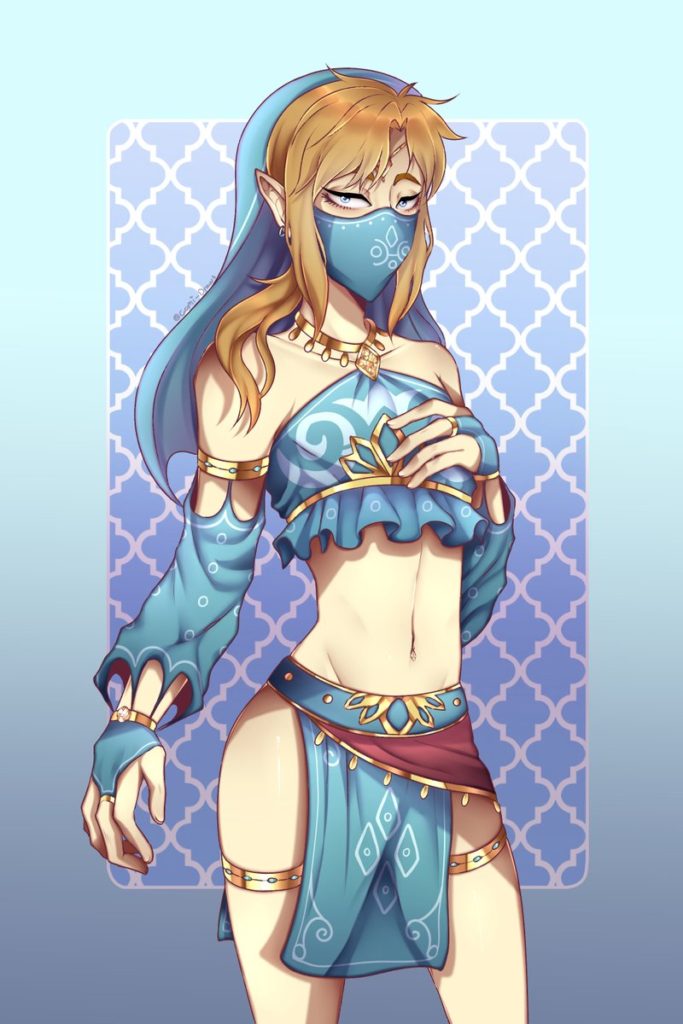 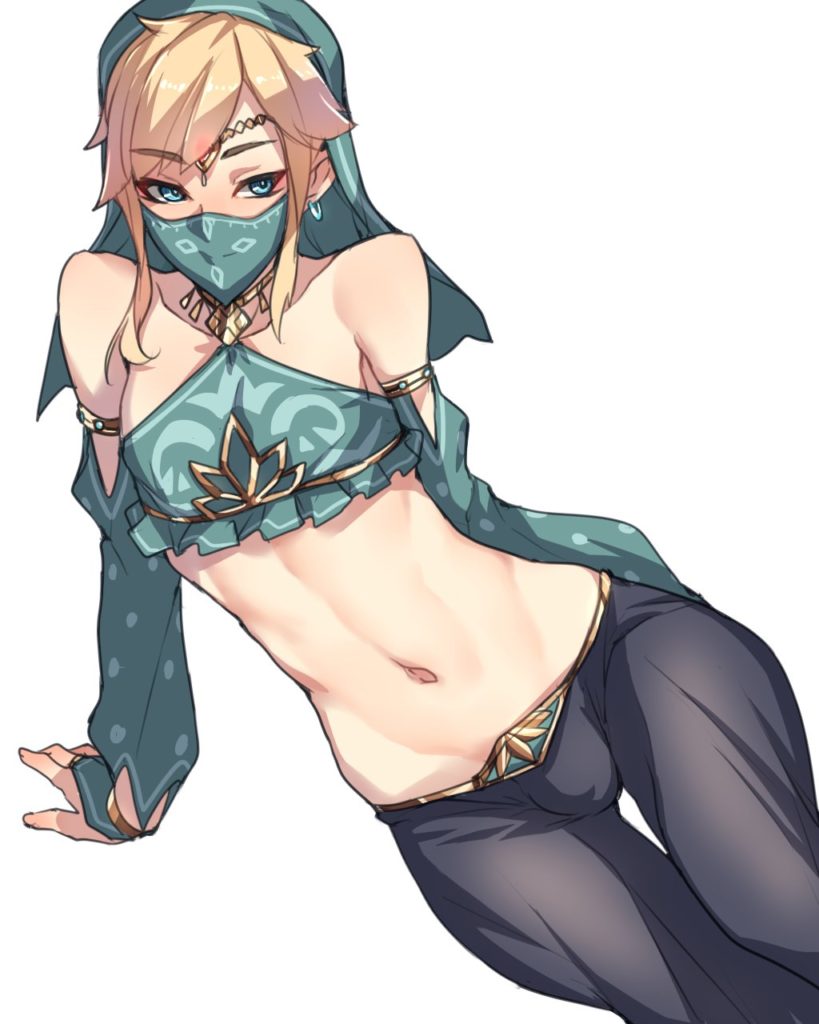 Personally, I think that Link crossdressing in game is awesome because, well, crossdressing is valid! When it comes down to it I don’t care if you are cis or trans, hating on crossdressers makes you a fucking douche.

Besides, if all the adult cis men throwing their little hissy fits just calmed the fuck down and thought about it for more than 30-seconds they’d realize that *gasp* Link has ALWAYS been an effeminate, androgynous twink who hangs out with fairies and loves playing cute little songs with his ocarina or conductor’s baton.

No, seriously… you’re playing these games as a pretty blonde elf boy with 90s boy band hair traveling the land of Hyrule sporting a colorful wardrobe of skin tight tunics and floppy nightcaps; and whose entire dialogue is a series of cute high-pitched squeaks, squeals, yells, and groans. And yes, even adult Link sounds fucking adorable. Admit it.

So, if you really think about it, Link crossdressing is about as surprising as the fucking 9000th time Navi says “hey, listen!”

And maybe it’s just that one time thing!

What I’m getting at here is that Link has always been pretty fucking queer, him crossdressing is fucking rad, he fucking rocks that outfit, and also, if you can’t tell the difference between crossdressers, traps, sissies, femboys, and transgender people then that’s your fucking problem and you can either get the fuck over it, look it up, or go fuck yourself.

Actually, you know what? Just go ahead and do all three.

All of that being said, Nintendo did include another character, named Vilia, who IS in fact trans… of course, they fucked that up on every conceivable level by misgendering her, having others refer to her as a man, and generally making her the punchline of a tired, uninspired joke.

In her piece for Past Magazine, Jennifer Unkle lays the whole thing out:

The first warning sign was a merchant hiding near Gerudo Town’s gates, determined to find “the man” who managed to sneak in undetected. Sure enough, “the man” was a svelte Gerudo woman perched on the roof of a nearby hotel who spoke with an exaggerated, husky tone. Link confirms Vilia’s identity by scrutinizing her body, and is then prompted to either exclaim she’s a man or compliment her beauty. The latter convinces Vilia to sell you a convincing outfit before the wind hits her veil, revealing her beard to a shocked Link.

Still, I find IMMENSE delight in the thought of cis gamer boys raging out about Link crossdressing all while squirming on their couch as they try to talk down the all-telling erection popping out of their sweat stained Sonic the Hedgehog boxers.

Oh, and by the way, if this upsets you, guess what? Furiosa being the real hero of Mad Max: Fury Road, all girl reboot of Ghostbusters, crossdressing Link… all of this is just the beginning. We’re coming for everything that you love, nerds, and there is nothing you can do about it because at the end of the day you are a dying breed and the future is queer and femme as fuck.