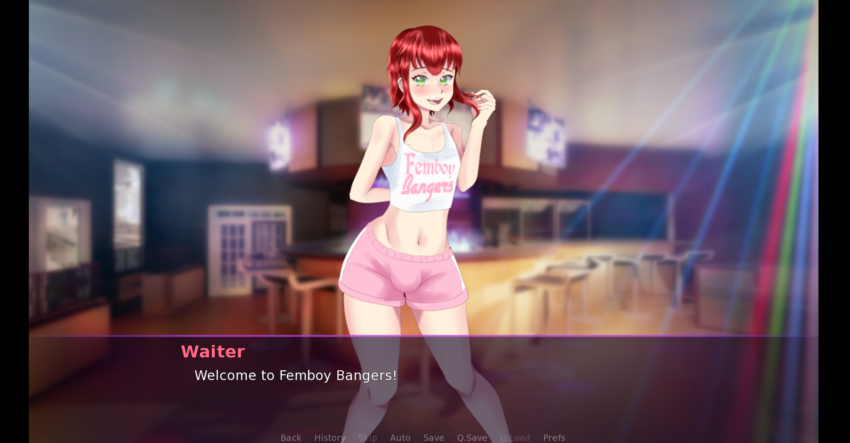 Game Length: I completed the game in 40 mins.

Summary: You, the protagonist, gets A+ service at a pub and grilled staff entirely by gorgeous, sexy, and driven big-dicked femboys.

Is It Sex Positive? Fuck yeah! All sexual acts are consensual, kinky, and queer positive.

The premise is pretty simple: while on your way to work you, the narrator, decided to grab some breakfast at a nearby restaurant that a friend recommended to you. It is of course, called Femboy Bangers: Pub & Grill. There you are served by a cute as fuck femboy named Riley who is more than a little clumsy, somehow managing to spill hot coffee into your lap within moments of your arrival.

What a great bar!

Sadly you have to rush off to work though and when you return to the restaurant after your day is done, Riley’s already gone home from his shift. Lucky for you though, there’s a hot barboy, Alex, in Femboy Bangers’ standard workplace uniform of a crop top, fishnets and skin tight booty shorts that do not at all hide anyone’s bulges, work attire. Conversation is a little strained at first, and it doesn’t really seem like Alex appreciates you, but you’re fucking charming so eventually you win him over. After serving you a couple of drinks at the bar he catches you checking him out. Feeling frisky, he decides to give you some of that high quality Femboy Bangers hospitality you’ve come to expect by pulling down his shorts and masturbating for you. 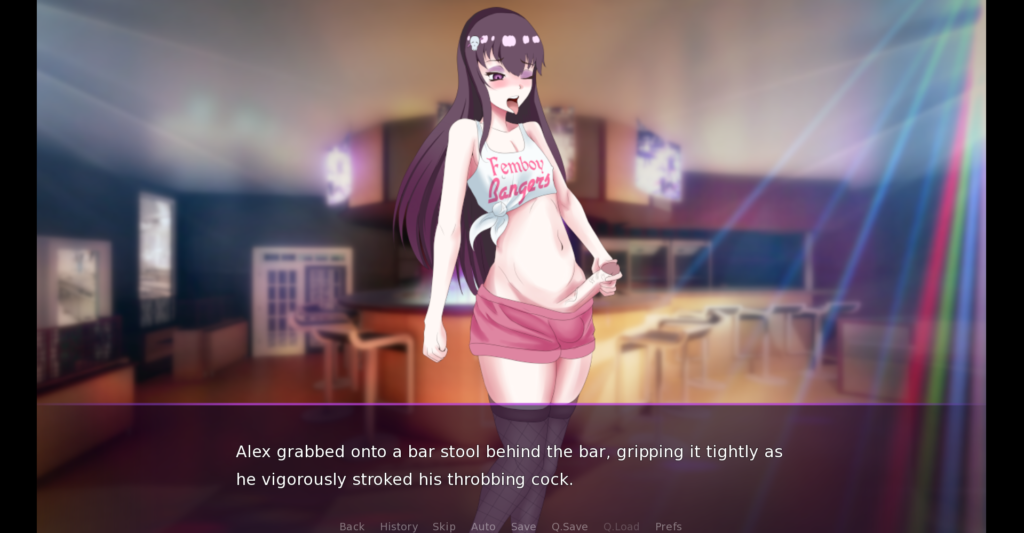 A handful more scenes follow, but the pacing is pretty breakneck. It’s overall a really short experience at less than an hour long. If you’re reading the dialogue fast, I imagine it could be finished in 20-ish minutes. Not that this is a bad thing!

Some of the descriptions were a little silly at times for me though. The sex scenes are described very lewdly, though that’s also part of the charm, I suppose. That being said there were some pretty glaring spelling and grammar errors in writing at times that were a bit distracting. The writing struggles with past and present tense in particular, resulting in some confusion about whether things are supposed to be happening in real time, or we are supposed to be reminiscing on experiences that have happened before.

Definitely recommend this one either at full, or sale price!