In fact, I’m pretty confident in saying that in terms of sheer volume alone the furry scene seems to have more queer and trans positive sexual content than any other art genre out there.

But, like, why? Why is it that the furry community seems to be such a huge conduit for expressions of diverse sexual orientation and gender identity? I dunno.

Last summer and fall I had the pleasure of first speaking with SalKitten, and then with SerialDad, about their thoughts on these topics; but I still feel that more input form diverse voices are needed!

So, to continue this series into 2018 I decided to reach out to HootSewers (<- his non-sexual art account), aka MrSewers (<- his NSFW art content), whose captivating style grabbed me as soon as I saw his work. And whose love for the macabre went right up my alley!

Here’s what we got to talking about: 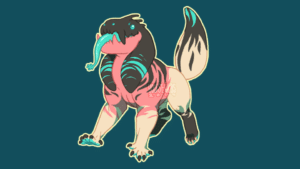 What initially drew you to the furry/anthro community and what do you enjoy about making furry art?

HootSewers: Full disclosure, I drew a lot on oekaki boards when I was in middle school and everyone had fursonas; since they were all wolves, I seriously just thought a fursona was a special wolf character you had; the portmanteau of “fur” and “persona” flew completely over my head. I’ve been in and out of the fandom a lot over the years; at this point, it’s more my side business while I finish up college. I use furry art as a medium to draw smut because A) it’s no different to me than drawn nsfw art with humans, and B) furries are WAY nicer customers! In my own experience, taking nsfw commission on tumblr and on FA, people getting art of their human characters are a lot more likely to ask for free art, or free edits of finished commissions; I’ve never had a furry customer complain about a price quote.

As a queer individual yourself, how big of a role, if any, does your identity play in the art that you create?

HootSewers: Aside from the fact that I draw a lot of gay stuff, my identity isn’t the biiigest part of my furry or nsfw art. I actually realized I have more non-cis characters in my sfw projects; I feel like the normalization of non-cis identities is best done in a format where there’s no attention drawn to their genitals, since that’s what cis people tend to obsess over when they’re introduced to a trans or nb character. Leaving that question unadressed I think would help cis people realize that maybe it’s not a question they ought to be asking in the first place. While I do have a few trans and intersex furry characters, my furry art tends to focus a lot more on mlm relationships because…that’s what I’m into. Lol

The furry community generally seems to attract a fandom of very diverse sexualities as well as gender identities and expressions. Why do you think that is?

However, there’s a drawback, that being trans fetishization. You’ve undoubtedly seen it; characters labeled with fetishizing slurs like cuntboy or vagentlemen for dfab men, dickgirl or futa for dmab women, and the not-only-offensive-but-also-scientifically-inacurrate hermaphrodite, often shortened to herm, for intersex characters. It’s one thing if the creator is trans and using these terms empower them, but you’ll notice that the vast majority of people who have these characters are cis and literally have a fetish for trans people.

It’s infuriating for two reasons, not the least of which is that trans people aren’t fetish objects. No marginalized group is, for that matter, but marginalized people get fetishized anyhow. The other reason is that the owners of these characters won’t even call them trans. In fact, many of them adamantly demand that their character is NOT trans at all and is, for example, “a woman with a dick.”

Your FurAffinity page states that most of your personal NSFW work Is Big Monsters with humans/hominids, and that you encourage folks to ask you about “how hot all of the Bloodborne bosses are.” I’m sensing a kink here!

HootSewers: I’ve been ousted! Even though most of my FA gallery is furries (human and kemonomimi art, at least from my experience, doesn’t garner the same attention), the vast majority of my personal characters are either humans, aliens, or monsters of other sorts.

There’s a few layers to the kink; the fascination with things different which I mentioned above is definitely one. When I draw a monster, I put thought and often research into how the monster works on a biological level. For example, I’ve got diagrams I drew for my own reference on how Bergamot’s (the rotten banana girl who is my ID pic) reproductive organs work, so that they could theoretically exist. Scientifically well thought-out depictions of monsters and aliens really gets me a huge spec bio boner, and it’s even more awesome to see in smut.

I guess what I love so much about monsters is that they’re totally something different than what I’d encounter in real life, and seeing them depicted in a life-like way makes it all the more real to me. Also size differences are awesome, not only for character dynamics (both in normal interactions and kinky stuff) and for making the characters visually dynamic is a big one.

As far as Bloodborne specifically is concerned: From Software makes INCREDIBLE monsters. Ebrietas, Daughter of the Cosmos, is one of my favorite monster designs all time for a number of reasons. Her natural anatomy resembling a kneeling human, her disturbingly human eyes located amid a mess of tentacles, the biological feasibility of her design, and last but certainly not least, she’s not sexy by normal human standards.

Nothing drives me up the damn wall like a perfectly good female monster design with a pair of perky human boobs slapped on last minute, or worse a female monster that is pretty much just there to be sexy, or like being sexy is her power. From Software doesn’t play that game, and I love them for it; honestly, my absolute dream job would be to do concept art for them.

Only tangentially related: the only three Bloodborne bosses I wouldn’t smooch are The Celestial Emissary, The Witch of Hemwick, and Rom the Vacuous Spider. Father Gascoigne is probably the hottest, with the Cleric Beast (and by connection Laurence) in a close second.

Your page also says to talk to you about weird genitals, and genitals don’t get much weirder than with big monsters and furries! So, what do you think it is about bizarre anthro genitalia, and the fantastical sexual organs of dragons, that gets so many folks all hot and bothered?

It’s like going to a bar and asking the bartender to surprise you (although if you’re gonna do that, at least give them something to work from lmao). You don’t know what you’re gonna get and you don’t know if you’re gonna like it, but even if it winds up being gross you still got to experience something new. Every time a new toy pops up on Bad Dragon, it’s totally different from the old ones; even with the picture, there’s really no way to tell how it would feel once you got your hands on it. It’s the fact that it’s different that’s exciting!

And now a lot of these themes and ideas seem to be coming together with the launch of your new webcomic, SplitFang. What can you tell us about this project?

HootSewers: Although it’s not porny at all, Splitfang definitely incorporates a lot of elements from my personal work. Lots of monsters, lots of queer characters (though no romantic subplots because I find them superfluous in an action-based story), and vampires and werewolves for good measure. I’ll toss my little elevator pitch in here as well.

Vladimir Splitfang is a primordial vampire found, emaciated and badly concussed, in an English alleyway with only flashbulb memories of his past. The humans who find him there believe he could be a powerful asset to England; France is under the control of a vampiric dictator calling herself Idurminise, and she is systemically destroying the nation’s population of werewolves. Until now, England has been powerless to stop her. Baily, a werewolf butler at Linwood Manor, and Tamandani, a hired human mercenary, are tasked with getting Vlad into fighting shape and helping him recover memories, unraveling an eldritch mystery about not only Vlad’s past but the very nature of their reality.

My plan for the webcomic is to release the entire first chapter at once, and after that doing a weekly page as is standard for other webcomics. I’ll be hosting it on tumblr at splitfang.com (right now it’s an error page because tumblr is taking their sweet time validating the domain), and the side blog for discussion, side comics, and maybe some Q&A will be at splitupside.tumblr.com (also a work in progress).

And I want to release the entire first chapter at once is so that people discovering the comic right after it begins will have something to read; it always bums me out when I find a cool webcomic, but it only started a month ago so there’s only three pages.

For more awesome artwork, check out MrSewer’s Fur Affinity account. Be sure to also follow Him on Twitter and keep checking out his splitupside.tumblr.com side blog for more news on the upcoming SplitFang comic.