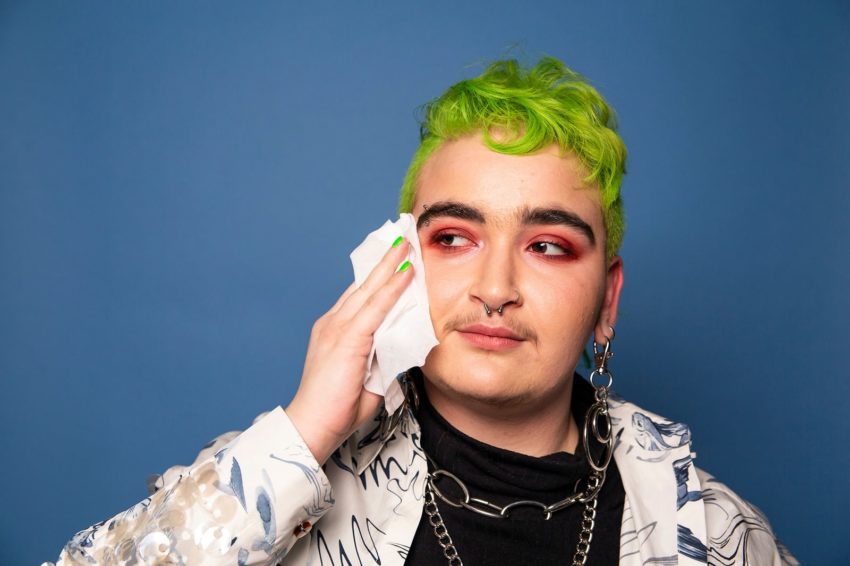 CW: This post contains discussion and descriptions of transphobic remarks, sentiments, and comments.

[UPDATE March 12, 2020: Rebels Notes is now running a “new” version of the Smut Marathon called The Blogable Fiction Marathon. Before you consider participating in this event, or any other run by Rebels Notes, May Moore, and/or Submissy, be sure to catch yourself up on their very long, very awful, and very public, history of transphobic abuse and bigotry as highlighted in this post.]

This isn’t going to be a positive, or even a nice post. I’m pissed off. Everybody I talk about in here has shown a contemptuous disregard for trans bloggers and people in general over an extended period of time, all while simultaneously claiming to be victimized by the very marginalized individuals they continue to disrespect and mock. So, fuck it, we weren’t ever going to be friendly anyway and I won’t be collaborating with any of them ever again (so long Wicked Wednesday!).

This post in particular ultimately comes down to the fact that if I had witnessed any of the following in regards to any other writing event I definitely would have been calling that shit out. As such, here’s why there’s a major transphobic and queerphobic laced bigotry problem with the renowned Smut Marathon competition from Marie Rebelle, aka Rebels Notes:

As many of you are likely unaware, at the very end of February 2020 the husband of a moderately known UK blogger, May More of “ifsexmatters” [she doesn’t get links from here], posted a “satirical” article in which he pretends to be a 300-year-old vampire that spills his vitriol for “General Gender, and her equally charmless fellow officers, Major Transplainer and Corporal Cant“. It just blathers on for hundreds of words mocking, demeaning, belittling, and ultimately vilifying trans people for wanting their pronouns and identity respected. Mr. More’s, aka Inigo More’s, decidedly merciless logic is that he doesn’t have to respect trans people or pronouns because, hold onto your hats: he doesn’t want to and feels he shouldn’t have to.

Wow. That shit is deep.

If you want to read it, it’s called “Soldiers in the Army of the World“, go ahead and look for it. It’s about as awful as you’d expect something like that could be and Mr. More doubling down in his own comments section by mocking any bloggers who spoke out gives you a really solid sense of who he is as a person. It’s not pretty. Classic edgelord behavior, only it’s from your retired and bored dad.

[UPDATE May 11, 2020: Inigo’s entire blog has been deleted, and the transphobic “Soldiers in the Army of the World” post is now gone. But the internet never forgets. To see a PDF backup of the original post as well as the ignorant comments from several sex bloggers, before it was all deleted, CLICK HERE.]

Needless to say, the trans sex bloggers, writers, readers, educators, and others, who did happen to see this post, were pretty fucking devastated. Not that Mr. More or his fans cared, of course. Why should they? They have the right to be awful and shitty all they want and if it offends anyone else, well, too bad!

That cheery bunch included several other UK bloggers such Missy [who writes as “submissy”], A Submissive Wife [she rebranded after being called out], SassyCat3000 [I know that she’s American but she threw herself in], Melody [of “melodyinsights”], HisLordshipUK and Marie Rebelle, the multiple-award winner and much celebrated blogger who writes at “RebelsNotes”, who all gleefully praised, and in many cases added to, Mr. More’s callous tirade with further ridicule and justification for misgendering.

Yes. You read that right. Marie Rebelle, or Rebels Notes. Organizer of the Smut Marathon. Who also runs the “Wicked Wednesday” bloggers prompt.

[UPDATE April 17, 2020: Melody has since written a post indirectly calling myself and any other trans blogger speaking up nazis, narcissists, and perpetual victims. The others mentioned above, of course, liked that post. Sadly, several other of our peers not previously involved also liked and shared it as well, revealing just how invasive transphobia really is in this community, and how quickly folks will reveal their anti-trans sentiments when bigotry is treated as “opinion”.]

Let’s also not forget to acknowledge that SassyCat, one of the other folks who has been throwing in with Marie Rebelle and May More. She runs “Sex Bloggers for Mental Health” and condoned this incredibly toxic and harmful hate piece too. I’d link to some resources on trans deaths by suicide and the rate of self-harm and attempts at suicide among trans individuals, but what’s the point really? She’s silently liked and supported that crowd for months now.

UPDATE: Through a series of tirades throughout the months of May and June of 2020, Sassy Cat not only continued to mock trans bloggers for speaking up but also wished that both myself and others within the community would literally die from Covid-19, or get hit by a truck. She also compared trans people with those who practice beastiality and overall, on numerous occasions such as these, made it abundantly clear that she was not supportive of trans people, their identities, their pronouns, or their lives.

Fast forward to the third voting round of the renowned Smut Marathon on March 29, 2020. One of those aforementioned bloggers, Sweetgirl, publicly comments on the only piece of erotica out of 67 entries that features trans characters by complaining about a trans women using female pronouns when she has a penis: “The female pronouns used with male genitalia made it difficult for me. I know this might not be PC to say but I want to be honest.”

This coming from the women who, now unsurprisingly, “loved” Mr. More’s anti-trans tirade and found it very “entertaining and amusing”. 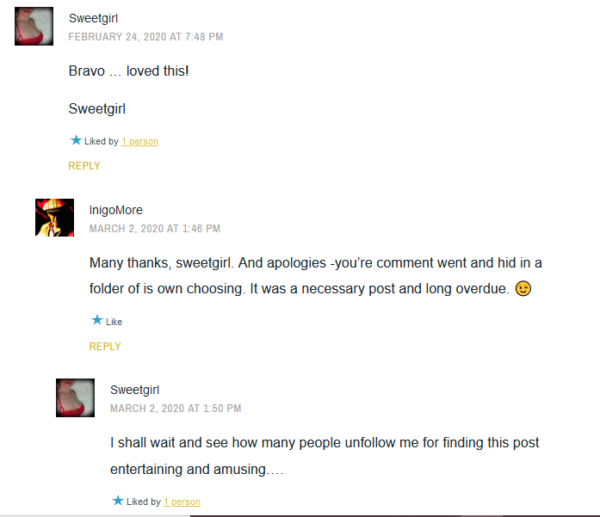 Feel free to un-follow and/or block her, if you’d like! She clearly doesn’t care anyway.

[UPDATE May 4, 2020: Sweetgirl has rebranded her site to “A Submissive Wife”. She has yet to publicly apologize to the trans community or any of the trans bloggers she has harmed. Further, according to her new introduction she seems to think that it was all a big misunderstanding and she was unfairly bullied for her actions.]

But I digress. The author that she subjected to her unnecessary and transphobic criticism was rightfully upset, made a vague tweet about it, and Sweetgirl was predictably eager to respond by reiterating that it’s not that she was “uncomfortable” with the pronouns… no, no. It’s just that as a straight women she doesn’t particularly read or enjoy any queer erotica because it doesn’t arouse her or bring her any pleasure at all.

Awesome. What supremely helpful and totally not at all shitty and abrasive feedback.

Now yes, Sweetgirl is not a jury member for the Smut Marathon 2020, and therefore cannot really be said to have any actual impact on the rulings. Thankfully.

But do you know who IS a jury member for Smut Marathon this year? Why it’s Mr. More’s wife, May More! That’s absolutely not a major fucking issue with the ethics of that jury at all, right?

(NOTE: it definitely fucking is.)

Now I could say that May More should immediately step down from the jury in light of her support of her husband’s bigoted, transphobic rants toward both her blogging peers who are trans, and trans people in general, but we all know that’s not likely to happen.

It’s also not likely to happen that Marie Rebelle issues any sort of formal comment explaining why she too continues to support and tiptoe around directly expressing anti-trans rhetoric herself, all while insisting that she’s a nice person and simultaneously working to situate herself as a victim of the mean old trans agenda.

And that’s a MASSIVE fucking shame because I think it’s a pretty fair bet to say that I know who’s not going to be winning the Smut Marathon anytime soon under these shadows: trans authors or anyone writing erotica featuring trans characters. Especially not any with gender neutral pronouns or, as Sweetgirl kindly pointed out in Round 3, “female pronouns” for “male genitalia”.

Fact is that there is simply nothing fair or ethical about a competition organized, and at least partially judged, by ignorance. There just isn’t. It throws the whole thing into disrepute and makes for results tainted with toxicity, prejudice, and discrimination.

What you do with that information is up to you, of course. I’m not saying everybody needs to just quit the Smut Marathon right now.

However, if you’ve ever thought of me or literally any other trans blogger as a peer, or enjoyed our work, had nice interactions with us, learned things, or even gotten off to any of our sexy content, please don’t be silent.

Let those involved with the Smut Marathon know that you see these behaviors from them and it’s not okay in a community that works hard to be “sex positive” and supportive of people of all sexualities, romantic orientations, and gender identities and expressions.

Those of us alienated, ostracized, and dehumanized by these repeated instances see that silence and the complacency of our peers too. It fucking sucks and hurts.

This keeps happening, it needs to stop.

Honestly, I’m not even remotely surprised this divide has happened though. I’ve seen it happen countless times in every community I’ve ever been a part of where trans and queer people exist.

Me being queer and trans divided and destroyed my family as the majority of them disowned me and treated me like I was a disgusting disappointment to them for loving and accepting myself in a way they deemed deviant and repugnant.

The trans community of my home town of Moose Jaw, Saskatchewan, was also ostracized and thrown under the bus as the lesbian and gay leaders started prioritizing being friendly with the city’s conservative demographic, the police, and mayoral office, rather than speaking out against rampant transphobic street harassment and intimidation. As a result almost every trans person I knew of living there has since moved away or gone back into the closet.

The existence of trans people also divided the Women’s Flat Track Roller Derby communities all across North America with numerous leagues folding because half of it’s membership supported trans skaters and the other half wouldn’t “play with perverted men pretending to be women to molest us”.

So honestly, this really hurts, just like it always does, but I’m also so used to it at this point that it’s just… like… a given now.

Speak up with us and help us make this community a safe, welcoming, and enriching environment for everyone. It’s just not going to work if people keep looking the other way and staying quiet about the effects that racist, sexist, queerphobic, or transphobic rhetoric have on our most vulnerable peers and friends.