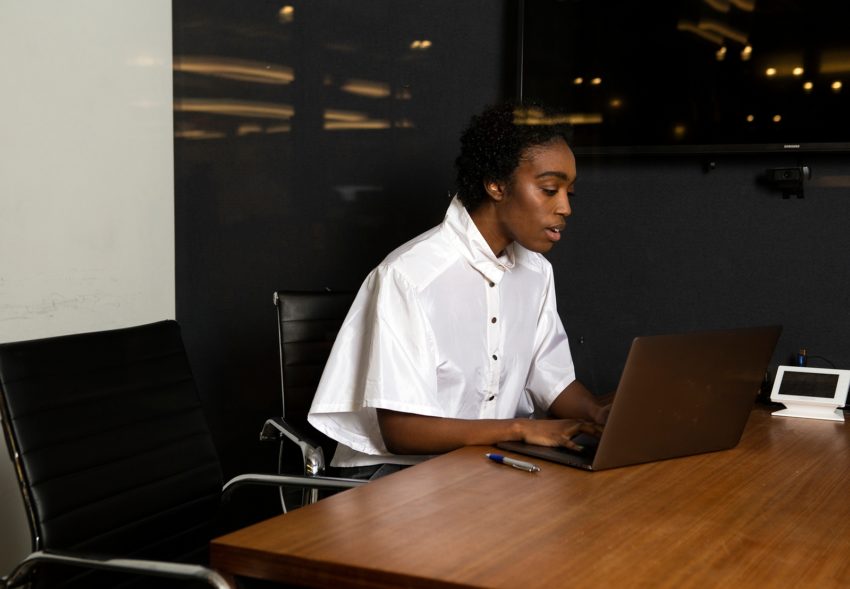 For Pride this month I’m running a meme called One Rainbow Apart, where I wanted to crate a safe space for trans and queer bloggers to express themselves in light of all the recent transphobia and cissexism coming from within the sex blogging community. I made the rules very simple, no ignorant or harmful content, and those who have expressed, supported, or otherwise publicly agreed with transphobic or prejudiced content were not welcome to participate. As they shouldn’t be… because… obviously..

As per those rules, I recently removed a post by A Mental Switch because he was one of the bloggers that on some level supported a very transphobic post from earlier this year. Unsurprisingly, he didn’t like that. He sent me an email, but before I could respond to it directly he made a post called “This is me taking a position“, in which he called me a bigot for not allowing bloggers that support or hold transphobic sentiments to participate in a trans and  queer centered writing event.

Of course, the irony is not lost on me that somebody (A Mental Switch), who has openly agreed with bigoted and belittling sentiments toward trans individuals, would of course call a trans blogger (me) a bigot for not allowing the voice of a transphobic bigot (A Mental Switch) on their (my) blog.

You calling out the “tone” of an intentionally cruel post that mocked and vilified trans people’s pronouns and self-advocacy, but agreeing with it’s core principles that trans people’s pronouns need not be respected and that those who speak out are fascists, does nothing to excuse the fact that you still AGREED with those intolerant and hurtful principles… that’s just fucking ludicrous. It doesn’t minimize that fact, at all.

It’s also befuddling that a fellow LGBTQIA+ blogger has decided that the efforts I’ve made, and stance I’ve taken in sticking up for myself and many other trans sex bloggers, and I’ll quote her exactly here: “…has nothing to do with trans rights anymore. This is war for war.”

No, MLSlavePuppet, this still has everything to do with trans rights, as well as the general safety and respect of trans bloggers. Because all of this is really fucking hurting a lot of us, and has been for months upon months, since as far back as last September when it was happening in PMs. Your inability to see that just further exhibits how deeply entrenched trans antagonism and cis privilege is in our community.

I’m so sorry that the fact that myself and other trans sex bloggers are setting these boundaries for ourselves, and not taking disrespect, dehumanization, and mockery sitting down anymore, is making you so personally uncomfortable and angry. But hey, that’s been the case since the very beginning as you have directly shown to many that you don’t believe us, that you don’t think things are really that bad, and you even directly expressed to me that since you “didn’t see” the transphobia happen (despite all the evidence before you) that you wouldn’t help raise our voices or speak out against those who’ve consistently been cissexist and harmful. Even when presented by experiences from many trans folks, you dismissed it all.

In fact, this WHOLE time you’ve taken a centrist position in public spaces, yet directly empathized with and supported our abusers on more than one occasion in the comments sections of their posts and Twitter threads. It’s getting increasingly clear that to you, trans folks speaking up are not nearly as brave as our detractors are for punching down at us over and over again. Your applause for A Mental Switch was never given to any trans blogger who spoke up over the past several months. That shows that you are not now, or ever have been, a true ally or friend to us.

It’s curious that for somebody who keeps saying she wants people to come together and communicate, to not take sides, you sure have been pouring all your energy in with one particular group…

Consider this YOUR call out now. Happy pride. 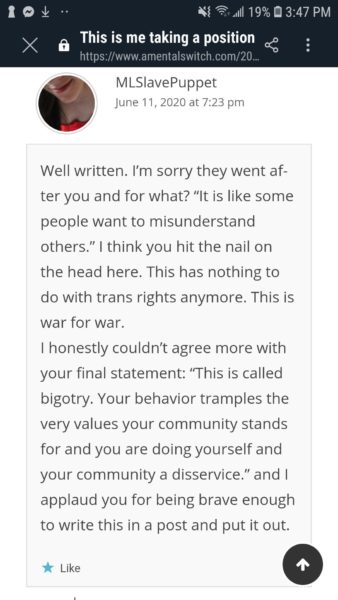 Anyway, why am I making this all public?

Because I’m fucking exhausted of the mental gymnastics, and displays of rainbow washing allyship, that harmful people are pulling over and over again to excuse their ignorance, flip the narrative to them being victims, and pretend they never did anything harmful in the first place.

Now, for the sake of transparency, accountability, and as a message to all of those folks who continue to deny their prejudice as they actively contribute to a toxic environment for trans bloggers and readers, here is the email that I finally just sent to A Mental Switch today:

UPDATE: The below response doesn’t really matter anymore. On June 18th, 2020, A Mental Switch deleted all of his blog content and put up a final goodbye message lamenting “internet crazies”, whining about trans people infringing upon his “free speech”, misquoted me to call me a fascist, and then knowingly and vindictively misgendered me.

It really was a truly beautiful display of textbook, narcissistic, cis dude toxicity. Because when it really came down to it, all it took to see his true colors and knee-jerk transphobic prejudice in it’s full glory was 1 trans person telling him to fuck off and not letting him participate in a meme.

Oh how fragile the transphobe is.

“As you already admitted, you publicly agreed with the “principle” of a post that mocked and dismissed the issue of trans people expressing hurt though being disrespected by misgendering. A post that further painted trans people setting respectful boundaries for themselves as nazis.

Critiquing the “tone” of that post, does not undo the fact that your support of those concepts shows that you are NOT a safe or respectful person to trans individuals.

Therefore, you are not welcome to participate in One Rainbow Apart, or any other memes that I run, until such a time that you acknowledge an understanding of why the beliefs you adhere to about trans people, and that post you agreed with, is harmful.

I’d love to believe this growth will come to you, however, your recent blog post shows otherwise.

If you think of me as being a “bigot” for creating a safe space for trans bloggers, for excluding somebody such as yourself who thinks of us as whiny fascists due to our self-advocacy and expectations for our identity to be respected by our peers, then so be it.

Feel free to not engage with me, or any of my content, again.

6 thoughts on “And Ignorance Persists: An Open Letter to A Mental Switch”