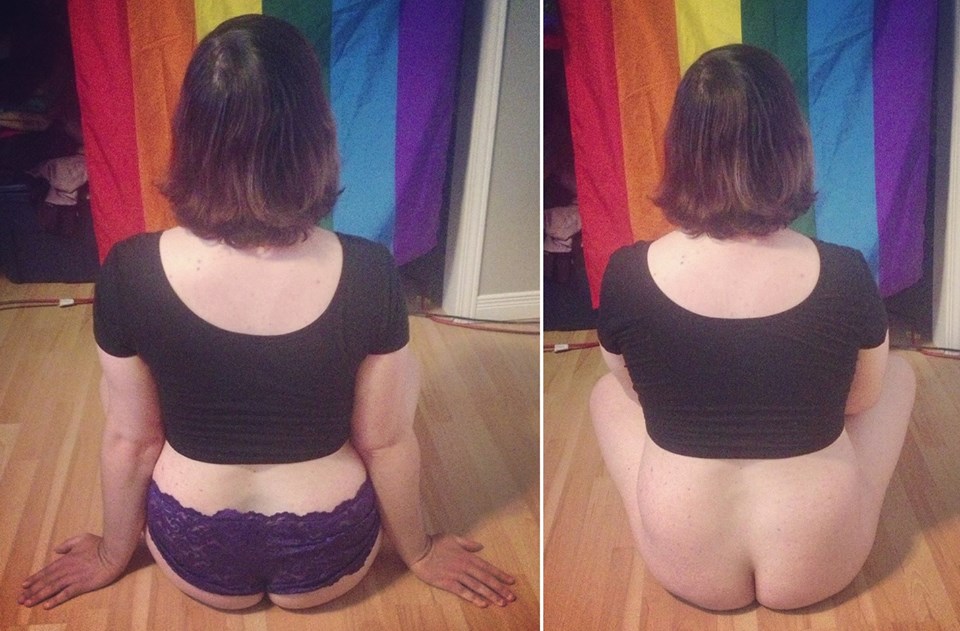 My heart pounded in my chest as he leaned past me to close his closet door. We sat on our bent legs, facing each other, so that our eyes were level. He was excited, and so was I.

I felt his hands slide around my waist, pulling both himself and me forward so that we were sitting upright on our knees.

“Okay.” I said, just as our bodies touched and his lips pressed against mine.

I closed my eyes. His grip tightened around my waist. My arms moved on their own, instinctively draping over his shoulders. Both of us shuddered. A mix of nervousness and excitement washed over me as I melted against him.

Looking back on it, I think that it is hilarious that one of the most defining queer moments of my life literally happened IN a closet.

*Ben [name has been changed to protect identity] was my childhood friend. We spent a lot of time together and though I can never quite remember the exact timeline of our experimentation with each other, the details of that closet kiss have really stuck with me to this day.

I recently wrote a piece for the Crash Pad Series blog called “How Learning About Queer Sex Taught Me Self-Love“, which allowed me the opportunity to think back to my friendship with Ben and reflect a little bit on the significance of my experiences with him. How I felt when he kissed me, when he held me, when he touched me, shattered my little, uninformed universe.

And the years that followed were pretty intense.

There were the years of secretly dressing in femme clothes, terrified of somebody finding out and confused about why I felt so amazing when I put them on. The years of frustration and overwhelming anxiety while crushing on classmates of all genders. The years of sneaking out of my house to suck a stranger’s cock in their car, completely ignorant to the dangers of those random hook-ups. The years of deeply destructive self-hatred and shame, that nearly destroyed me completely. And, most recently, the year’s of healing, acceptance, understanding, and devoting myself to practicing self-love.

Today, I am out as a mega-queer, non-monogamous, andro-babe who is looking at starting hormone replacement therapy in the very near future and is currently on track to begin a career in the field of sex education and blogging.

Did Ben identify as queer? Did he ever come out? Were his experiences with me as transformative as my experiences with him were? Did he experiment with more people with penises after me? Was I his first in a long string of queer sex encounters and love affairs? Did he ever talk about me to new romantic or sexual partners?

Did he struggle with his gender too?

Who is he today?

I was curious. So, a couple of days ago I looked him up on Facebook; which was a little difficult because he has one of those names that a lot of people have with ever so slightly different spelling variations. But I knew I had the right person as soon as I saw his face.

It was his eyes; and that grin. Both were exactly as I had remembered.

It didn’t take me long scrolling through his wall though to see just how different our experiences were. In fact, aside form a mutual interest in comic books we really didn’t have anything in common. But he looked fulfilled, and that was pretty awesome to see.

So, that’s it really. Sometimes you don’t get the answers you’re looking for because in the end they’re just not necessary. I didn’t need to know what I meant to him, or the details of his life’s journey. What happened between us happened, but he’s not obligated to feel the same way about it that I do. Maybe I was just an experience for him. A distant and hazy memory of radical self-exploration.

Whatever he remembers, or doesn’t, it’s all good. He looks happy.

Ben, you’ll probably never see this (especially since you never knew me as Nillin), but thank you for the memorable sleepovers and make-out practice. Glad to see that you’re still a lifetime Ninja Turtles fan. I am too.

NOTE: Thursday updates will be re-posts from mxnillin.wordpress.com, which was permanently suspended by WordPress for due to their anti-porn and anti-sex work policies. This post was originally published on August 30, 2016. Please read the announcement post to learn more.