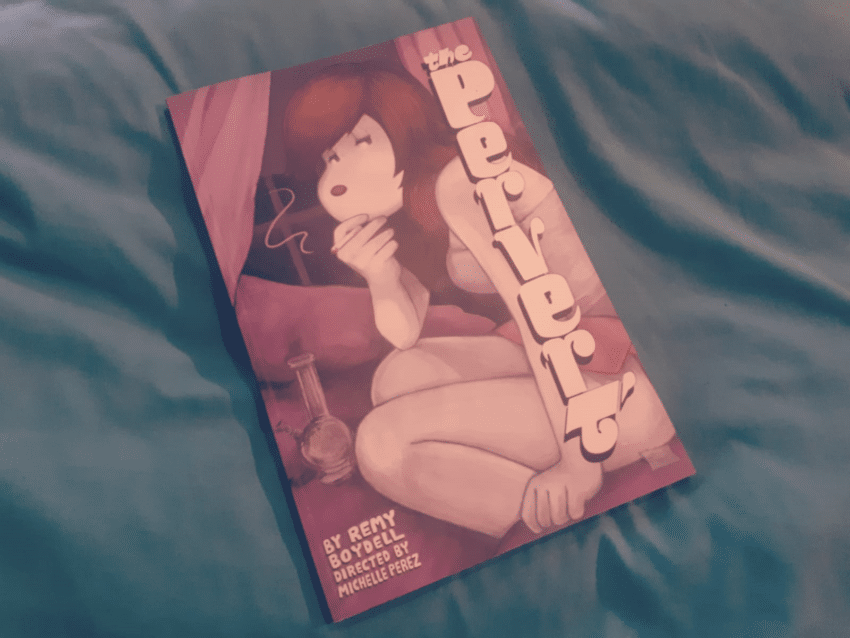 When I found The Pervert, an Image Comics title written by Michelle Perez with amazing art from Remy Boydell, among an endless sea of Marvel and DC titles at a pop-up comic sale in a not-big-enough meeting room at a Sandman Hotel, I was fucking stoked!

I mean, what are the chances of discovering an adult graphic novel about a trans woman sex worker navigating closets, transitioning, violence, love, sex, and life, that also featured highly emotive and yet still somehow very cute furries as it’s central characters, in one of hundreds of comic boxes surrounded by thousands of single issue and trade paperback superhero titles?

Slim to fucking none, are the chances of that! Yet I did, and I couldn’t be happier for it.

That very same day, as soon as I got home, I ran myself a nice, warm bubble bath and sat to soak with my purchase in hand.

While I was of course hoping to enjoy the read, I wasn’t at all prepared for just how fucking powerful it ended up being.

In my first skim through the book immediately after finding it, I caught glimpses of explicit scenes featuring some really awesome looking, well drawn, queer, and non-monogamous group sex, which of course was a massive draw from the get go. However, while sex does play a substantial role in the book and it IS often hot as fuck, I wouldn’t exactly call The Pervert a sex comic so much as a comic with sex in it.

Originally published as a series of excerpts in the subversive, Eisner-nominated comics anthology magazine ISLAND, The Pervert is a sort-of-linear story that unfolds as sometimes very disjointed glimpses into the life of Felina as she faces great adversity in workplace discrimination, queerphobic harassment, poverty, boundary violations, fetishization, and physical and sexual violence, all while slowly transitioning with few supports. It’s a heartbreaking journey with glimpses of hope that are continuously trampled over by a world still deeply ingrained with queerphobic ideals that keeps gender and sexually diverse folks alienated, isolated, and impoverished. 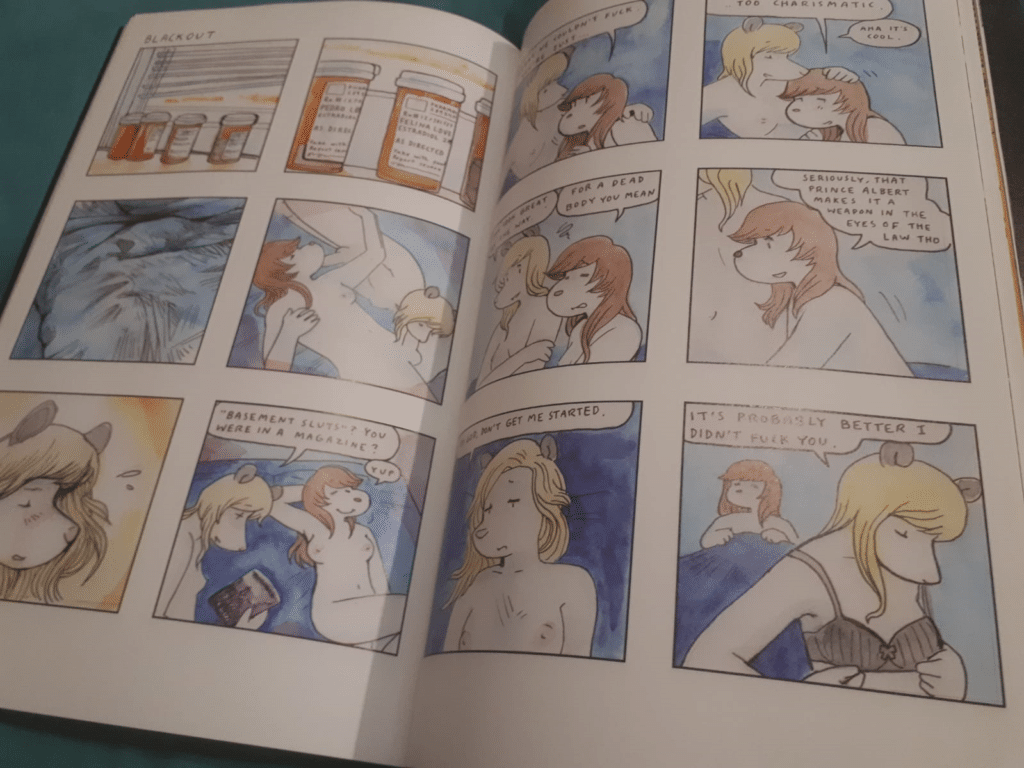 I’ve experienced a similar journey myself through periods of financial turmoil due to unemployment from hiring discrimination, mental duress thanks to ceaseless street harassment and intimidation, community alienation for being the wrong kind of queer, family abandonment, PTSD from decades of emotional abuse, trauma from instances of sexual assault, and more. So of course much of Felina’s life hit very close to home for me.

A secondary narrative follows one of her clients, Tom, a 62-year-old man, falling in love with her because she reminds him of his wife, Edna, also a trans woman, who tragically died years ago, leaving him devastated and alone. Tom wants to save Felina from her life as a sex worker and look after her, which includes giving her a home, food, and paying for the rest of her transition. He’s a sweet man who is easy to sympathize with at times but like many of the other cisgender characters he ultimately only wants Felina for his own sexual and emotional needs. While convincing himself that it’s love that draws him to Felina, it’s ultimately loneliness and nostalgia. He literally wants to pay her to fill the void left with the passing of his wife.

And that’s… nice of him, I suppose, but more importantly it serves to highlight how sadly misguided and ignorant many cisgender folks are to the struggles of trans folks. And how assuming to know what’s best for us isn’t helping. For example, Tom taking in Felina would, at best, be a bandaid and, at worst, an action that centers Tom’s needs and desires over Felina’s, potentially making her feel as if she owes him an emotional and sexual debt. That’s, unfortunately, not an uncommon experience for many trans folks.

Truth is that we don’t need somebody with a savior complex sweeping in to rescue us from what they perceive as a miserable existence all of the time. Sure, it can help some in crisis, at least temporarily, but that’s not what needs addressing to improve our community’s quality of life. And it certainly isn’t what Felina needs or wants, and it’s empowering to see her stick to her independence and choices.

No, what we need is non-discriminatory employment, housing, medical care, and education, so that we can live fulfilling and enriching daily lives not unlike cis people do. We need the full decriminalization of sex work so that vulnerable queer people, like Felina, can work without fear of abusive cops and clients. We need comprehensive, queer inclusive sex education and support for gender and sexually diverse students in school so that they don’t feel alienated from society before they even get a chance to join it as contributing adults. If Felina had these supports. it’s likely her experiences would have been much, MUCH different than those depicted.

But she didn’t, and this is the crux of The Pervert.

At it’s core, the book is all about trauma and survival through a decidedly queer lens and the result of that was, for me at least, a genuinely engaging and poignant reading experience. I mean, I’ve known every single character in this book, from Felina, to Tom, and all of her queer sex worker friends. They’ve been my friends, my lovers, my family, my peers, and my exes. They’ve encouraged me, pleasured me, empowered me, and even hurt me, while I in turn have done the same to them too. And I’ve told and heard the same stories, jokes, and histories that play out on each page.

As a 30-something, queer, gender nonconforming, polyamorous sex worker (of sorts) myself The Pervert truly is one of the most relatable LGBTQ+ comics that I have ever encountered and I would highly recommend it to you all. Whether it is a part of your life or not, the art and story are engaging, and the insight into the shared experiences of many involved in these situations is honestly, pretty priceless.

You can The Pervert online at Amazon.ca or possibly pick up a copy by calling your local comics shop, bookstore, or library.