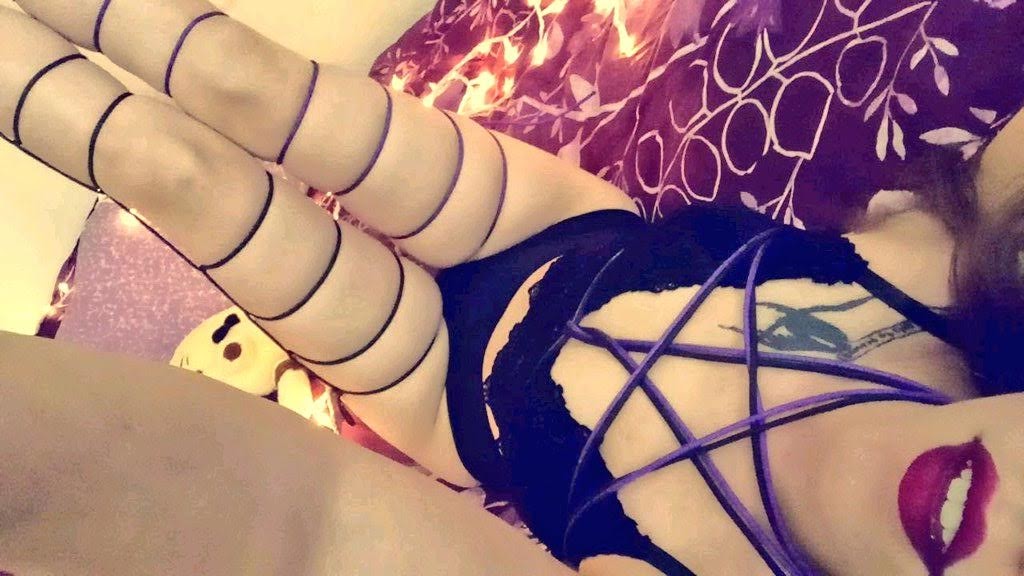 Check out what we got to talking about!

[NOTE: curious about the ey/em/eir pronouns in this post? They are used by a number of nonbinary individuals. Click here for some basic usage examples.]

How did you get involved in sex work and how has it been as an out nonbinary, queer performer?

Prax: I became involved in sex work about a month before my 19th birthday. I’d wanted to be a cam model since my teens and finally had the space and means to do so, so I just jumped straight into doing custom videos and went from there. It’s been a little difficult being “out” as non-binary/trans, but better than I thought it would be. I don’t have much trouble asserting pronouns and terms nowadays, but it does pose a bit of a puzzle to try and explain to someone staring you right in the vagina that you aren’t a woman.

From your own experiences, and those of others you know, how is the greater sex work industry for queer and trans folks in terms of inclusivity and accessibility?

Prax: I would say the sex work industry is a lot further than a lot of other capitalist industries when it comes to inclusivity and accessibility for trans/queer laborers. Of sites I use, there is only one that doesn’t allow “visibly trans” folks. That being said, I would say it’s a little difficult as a non-binary or gender-nonconforming person when it comes to inclusivity.

Trans categories on clip and cam sites tend to be reserved for transitioning trans folx, specifically post-hormone/pre-op trans men and women. Whereas I understand this as a “niche” or “fetish” when it comes to sex work, it’s frustrating for me as a non-binary individual because if I put myself in the “trans” category (when camming for instance), I’ll have members expecting something much different from a “femme” looking person such as myself. Thus, I’m forced to put myself in the “female” category, which causes me to be misgendered a lot.

All that being said, I’m not sure what the best solution to this problem would be. If a “middle” category was created, I don’t imagine it would get much traffic, if any, based on people not knowing what exactly being nonbinary is in the first place.

On the flip side, I get misgendered WAY less than I imagine I would in a typical vanilla employment situation. Fellow sex workers are generally very familiar with the queer community, and members are happy to adapt their vocabulary and behavior more often than not. 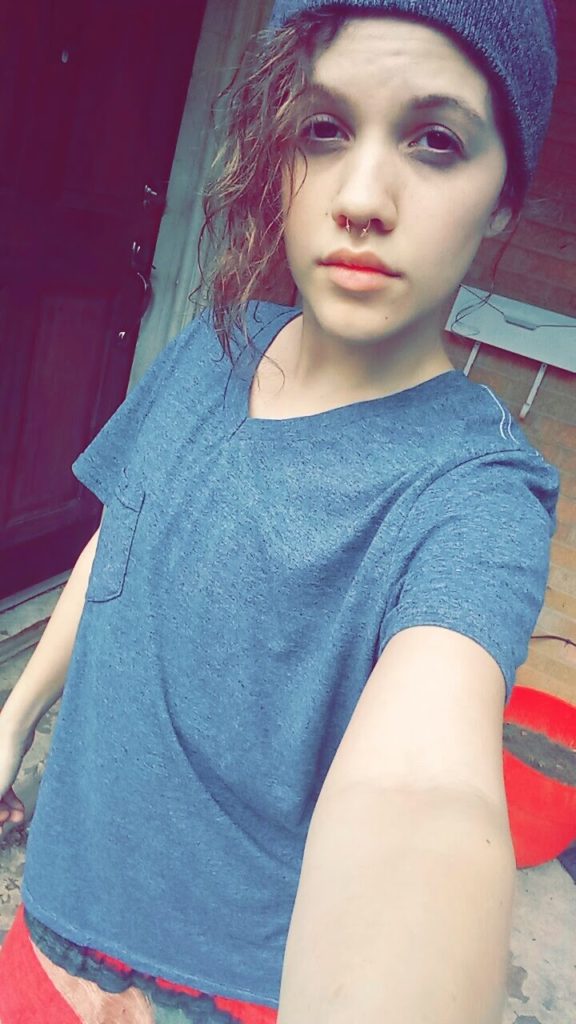 For the most part, how have your clients and customers been in regards to respecting your identity, pronouns, and boundaries?

Prax: I would say my clients and customers have been amazingly supportive and adaptive when it comes to respecting my identity and pronouns. I have also probably lost a lot of potential customers through asserting my pronouns and boundaries. I have had members in my chatroom outright tell me, “Well, you can say you’re whatever you like, I’m going to consider you a woman,” in outright disrespect to me. It’s kind of silly when you try to get to the root of it in your head.

I have to imagine the cis straight man on the other side of this computer is MORTIFIED of being attracted to someone who isn’t a woman, so he forces this label upon me to sate his fears. This is frustrating, but not a big issue for me personally because I don’t accept these types of people as customers. There is no amount of money someone can pay me to intentionally misgender and disrespect me.

You recently celebrated your 2-year-anniversary of camming! What have been the biggest lessons and takeaways for you going into the next year of your career?

Prax: Oh goodness, this is a biggy. Well in my first year of camming I figured out the ins and outs of a lot of things, most notably filing taxes and tracking business expenses. This year I went a little overboard trying to travel, film with other models, buy good equipment and props for filming, etc. I didn’t necessarily hurt myself financially, but I did cut into my profit a bit more than I wanted to.

What I’m getting at here is, although all of those purchases DID further my career and really push me to do better, I learned this year to take things more in stride rather than going “balls out” (for lack of a better phrase). Traveling to business events, filming with other performers, making high quality content, keeping an eye on the end goal, all of these things are really important, but it’s vital not to lose sight of what’s in the short term as well.

Of your work so far, what have been your favorite shoots, scenes, and/or shows?

Prax: This is so hard! My favorite scene for myself and my own experience would have to be my scene with PrincexPunkin for the simple fact that they taught me SO much! It was only my second ever shoot with another model(s), and it was my first time EVER at AVN. They helped me understand different types of content trade work, helped me work through my nerves, and helped me understand the dynamic between two or more content creators and how to handle that professionally. That event really honestly set a bar in my head for how other performers should conduct themselves during business and I don’t think I could thank them enough for that.

My favorite scene visually/for consumers honestly has to be my Blood Bath video from this time last year. I have a huge blood fetish that I can’t really explore professionally, or at least it’s difficult to due to restrictions on content and payment processors. The contrast of blood against just about anything is so aesthetically and sexually pleasing to me, so when ManyVids finally started allowing fake blood last year, I HAD to do that video and it came out better than I could have imagined. I just want to keep doing it again better and better. Every time I see the preview for it, I get excited again! 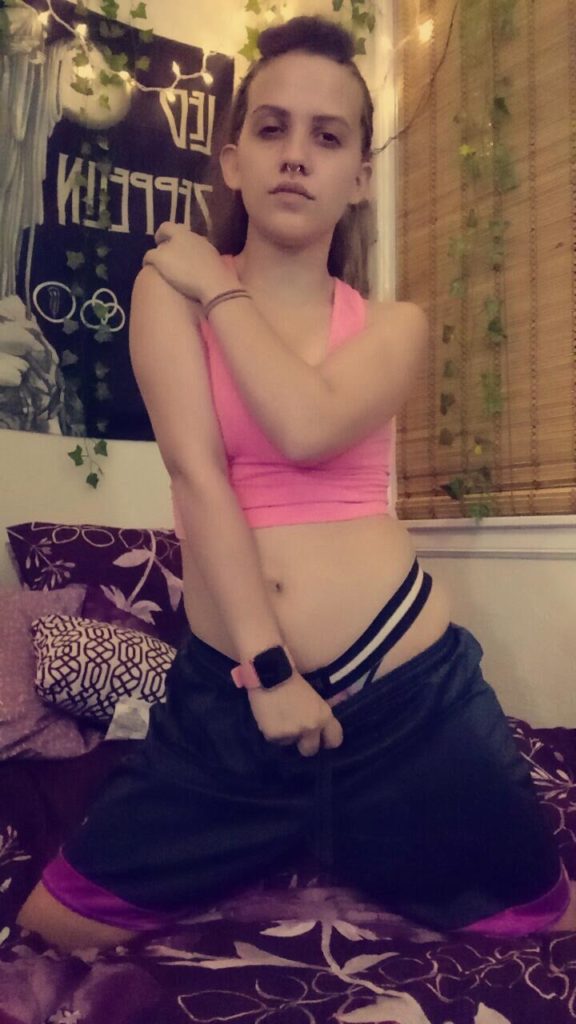 In reading your recent ManyVids article, “Trans Visibility”, you  talked a lot about how important it is for the industry to embrace educating folks on diverse expressions of gender identity and sexuality because “clients and providers alike could provide a much safer and more fun sexual environment because when everyone feels safe, everyone feels comfortable, and EVERYONE is most sexy at their most comfortable.” This really resonated with me!

What are some starter ways that you think people working in, and interacting with, the industry can start to do toward building a safer and more inclusive space for everyone?

Prax: If you’re asking about safer and more inclusive spaces for trans/queer folks SPECIFICALLY (which I think you are), I think the BEST way to start is first and foremost by asking pronouns. It shouldn’t feel weird to ask someone what their pronouns are! It also shouldn’t feel weird or bad to correct yourself when you get it wrong. If someone accidentally calls me “she” I really don’t like it when they start to apologize profusely and feel bad; I don’t want them to feel bad! It’s much easier for both parties if the person just quickly corrects themselves (Ex: “She was.. Oops! They were…”)

Secondly, establishing limits. I think it’s important to have more reasonable expectations of not JUST trans/queer performers, but all sex workers. Just like any BDSM interaction (vanilla interactions should also be like this), boundaries need to be established before sexual contact even occurs. For instance, in an example discussion I’ve had with my wife who is trans, if one wanted to dominate a trans woman you might ask what kind of humiliation she’s comfortable with. A lot of trans women may be really put off or even hurt by kinks like sissification/feminization and humiliation because the last thing they want to feel is shame for being feminine.

Another example, I enjoy little space but I don’t like being called “babygirl” for obvious reasons. Another issue I see in shoots is producers expecting all pre-op trans women’s penises to either be harder than they are, ejaculate, or other things that hormones hinder in a lot of instances. There are SO many kink nuances like this that should really be discussed before any sexual interaction, whether business or pleasure.

It shouldn’t feel weird for both parties to put everything on the table so that everyone has clear knowledge of others’ preferences.

For more content from, or to connect with, Mx Praxis Phanes, be sure to utilize the following links: