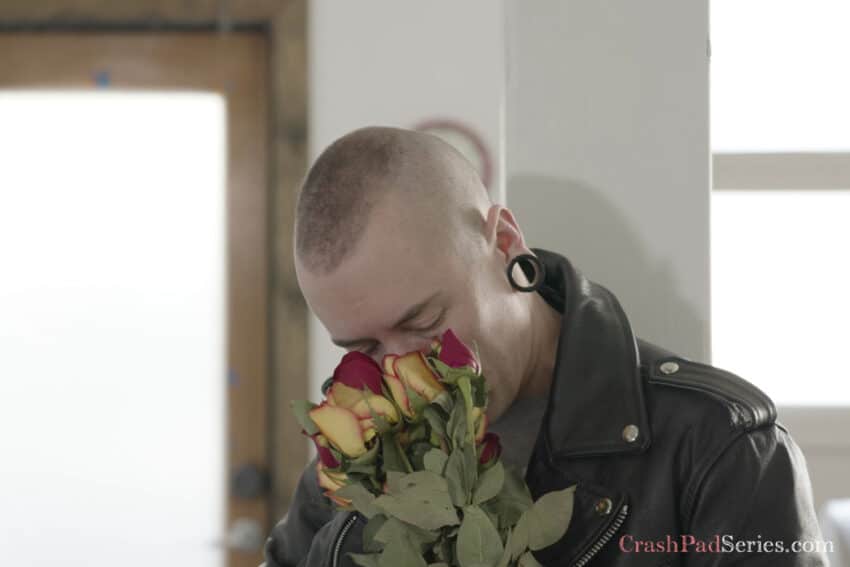 “Welcome to CrashPadSeries 2.0! The logistics of voyeurism are complicated in 2021, but you know what they say… Improvise, Adapt, and Overcome!“

Now, let me tell you… improvise, adapt, and fucking overcome they have!

Crash Pad Series has always been extremely good at presenting an ethical, exciting, and creative voyeuristic look at some truly intimate moments of queer eroticism over the years, but with the changes they’ve needed to make in order to continue filming scenes I’d argue that it’s even more voyeuristic now. Whereas before the viewer was presented with inter-spliced clips showing extreme close-ups of the face of a nameless viewer (meant to represent us at our computer screens), now we’re presented with our performers entering a large studio space with a remote controlled camera rolling while a cute voice comes through a walkie-talkie instructing them to just go ahead and start playing.

It’s fucking hot right off the bat and honestly the idea of me walking into a space like that, either by myself or with a partner or play friend, to put on a show for the cameras and whatever audience may be watching through them, is exhilarating.

It actually feels like a really natural evolution for the studio and while I can imagine Covid has made producing content exceedingly difficult for everybody I can’t help but feel this new form of shooting actually works even better with their overall theme.

As soon as he walks into the room, smelling a bouquet of flowers (which I’m told that he bought for himself, A+ self-care!) he gets right to work teasing himself and slowly undressing. Then comes his first queer power move, which consists of him removing his black boots and pants only to then put his boots BACK on once he’s down to his boxers! It’s a really hot fucking look and immediately lends to the rest of the shoot. Best part being that those boots don’t come off again… not even when he’s otherwise completely naked and bringing himself to orgasm.

Speaking of queer power moves, I also really dug when he pulled off his underwear and then shoved them under his nose to start sniffing them. I’m really big into sex scent, the smells our bodies make when we’re aroused, so witnessing a moment like that was pretty fucking hot.

Running at just over 17-mins, Episode 313 is the perfect length for a solo scene and James is, as always, mesmerizing to watch. Membership to the site goes for $25.00 USD a month, or as low as $9.99 USD per month for an annual subscription (charged one time as $119.80 USD), which gets you access to not only James’ scene but literally hundreds of other hardcore queer sex videos featuring group sex, kink, and other diverse forms of eroticism, all centering queer and trans bodies!

And with Crash Pad‘s new, extra voyeuristic set-up, there’s a lot to be excited for going forward too. I can’t wait to see how future scenes with other performers unfold!