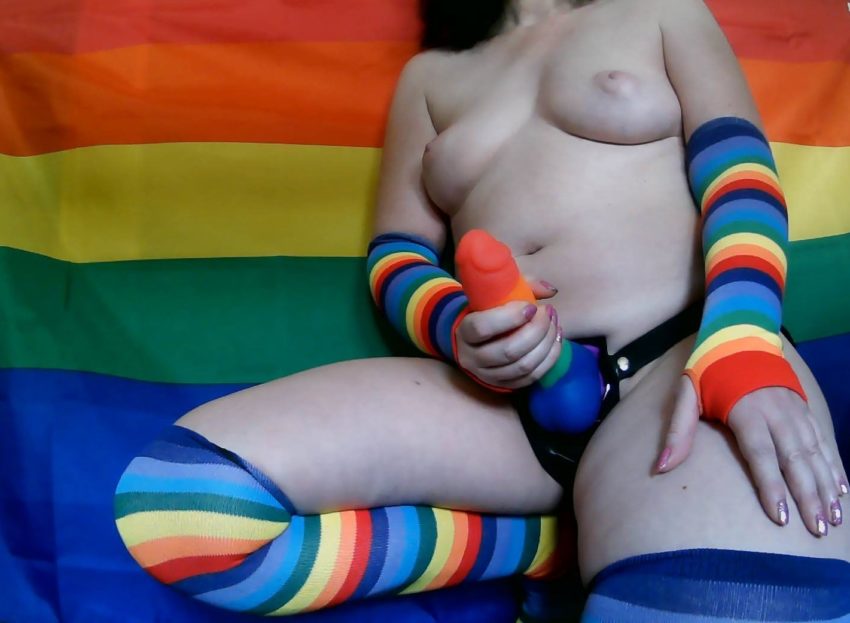 That was fast! Here we are already wrapping up week 2 of One Rainbow Apart 2020 and the incredibly affirming, empowering, affecting, and hot as fuck queer and trans centered content keeps on coming in!

Sadly, I got hit with a cocktail of dysphoria woes, executive function struggles, and general depression that knocked out all of my inspiration and kept me from writing much of anything this past week or more. Luckily, there are so many other amazing queer and trans bloggers the world over participating in this event that Week 2 was just as amazing as Week 1.

Be sure to also check out all of the amazing content that was linked into One Rainbow Apart during week 1 as well.

And shout out to Vanilla Free Sex for letting me use this amazing and very fucking hot image as the featured header for this round-up!

“Ze nods obediently and sits in quiet anticipation. I draw the razor across hir head and sluice it off in the tub of water. A furrow of bare skin exposed amid the white foam. I draw my finger across the newly sensitised skin and smile at the shudder that runs through my boyfriends body.”

“Yes, Pride is often painted as fabulous drag events, parades, parties, town squares filled with vendors. But Pride is also internal and something we should nurture within ourselves every day. Whether you’re out, closeted, or half-and-half, you deserve to be proud of yourself.”

So Am I Bi or Pan or Queer? by Little Switch Bitch

“…I ended up having kids and the gay part of my heart was put to one side until I met my husband and I have been in a monogamous relationship with a straight cis man since. Some might think that makes me less pan or bi or whatever I am, but believe me when I say this – I am anything but straight.”

“Guiding Beryl’s wrist, Deryn placed her hand between their legs. The heat of their sex warmed her palm, and she felt a thick, stiff nub of flesh beneath her fingers. Deryn thrust their hips forward, growling as their lips brushing against her forehead, ‘That’s my clit. I want to fuck your mouth. Will you let me?’”

My High School Experience Being Bisexual by Vanilla Free Sex

“I was lucky to have made gay and lesbian friends at work that made me realize I wasn’t alone or a freak, that it was okay to be me. Being a girl from a small town with no LGBTQIA+ groups or centers I don’t know what would have happened to me without having them in my life. They became my chosen family and we remained close for many years.”

Am I Gay? by Kelvin Sparks

“The idea that somebody like me could be a gay man still feels a little weird. I don’t think I’ve ever really [heard] a discussion of internalised homophobia that was from a trans gay man. I think even within queer spaces that pride themselves on being trans inclusive, ‘gay man’ and ‘trans people’ are seen as entirely separate groups with no crossover.”

My Pride by Happy Come Lucky

“…I struggle with how to describe my sense of self now. I don’t identify with the way that woman is perceived in these times but I do identify very strongly with the older origins of the word cunt and the possibility that it describes woman and is tied to a life giving energy. That definitely works for me but is a hard identity to know how to label so I don’t.”

“It makes me sad to think of all those years in which I grappled with feelings which were perfectly normal. All those years worrying that my sexual attraction to my husband was a lie because he was the only man I was attracted to. What a fucking waste. And what infuriates me is that it would’ve been SO easy to avoid. If I’d had proper sex education in school.”

“I vividly remember the first time someone referred to me using they/them pronouns. I don’t recall their face, their name, or where this happened. What I do remember, however, is how it made me feel. Two simple words—“they said”—warmed my heart. No, I really mean it: I felt warm. I felt light. I felt radiant.”

For all upcoming posts, be sure to keep visiting the One Rainbow Apart event page! 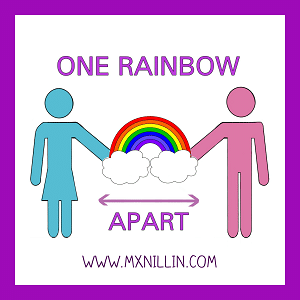