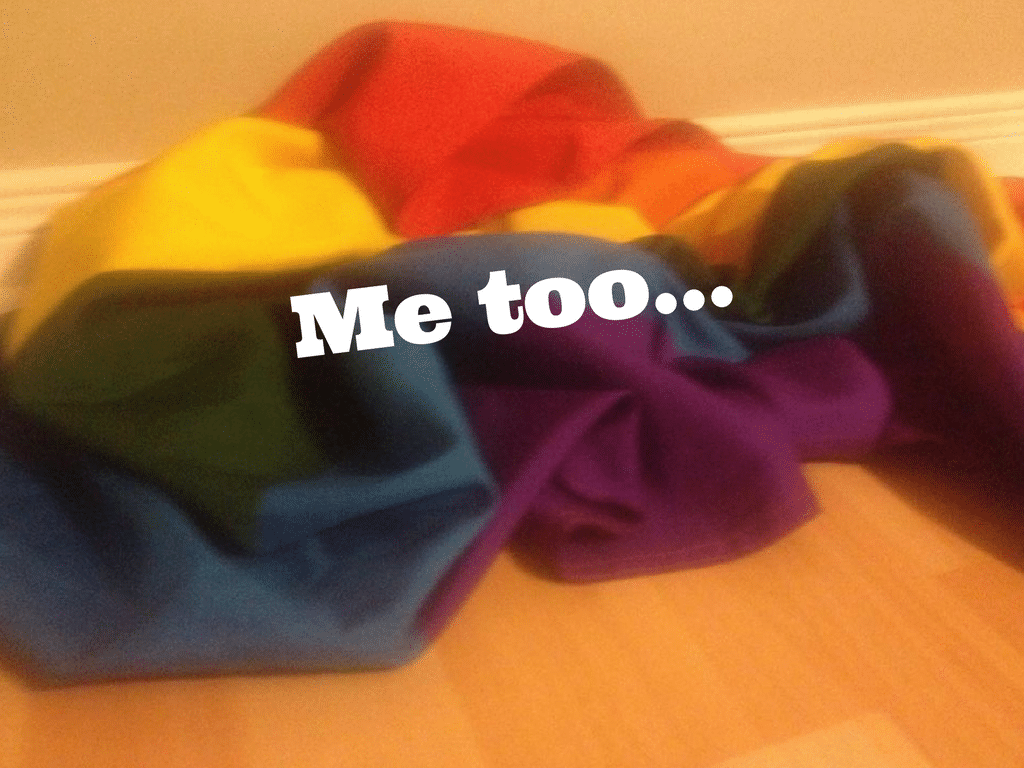 It has been a pretty fucked up month. Not only have revelations of Harvey Weinstein’s predatory sexual assaults of, and harassment toward, numerous industry women throughout his career come to light but recent discussion across social media about the prevalence of sexual assault in our society has made one thing painfully clear to me:

Literally every single queer, trans, fem, or non-binary person that I know and love has been sexually assaulted at some point in their lives. Let that sink in for a moment, because chances are that it is true of those in your life too.

And you know what? I have been too.

When I was 16-years-old, after years of struggling with deep shame over crossdressing and feeling attraction to both girls and boys, I joined a gay and lesbian youth support group. I didn’t really have any expectations of it. I still wasn’t using words like gay, trans, or queer, for myself, and I was INTENSELY afraid of any of my friends or classmates finding out I was in this group.

So, I kept quiet about it.

We didn’t meet super often. Maybe a couple of days a month, and it was mostly just hanging out, socializing and talking about what was going on in our lives. I mostly kept quiet, and was quick to leave after we were done.

Just a couple of months into these meetings I was slowly starting to accept some of my thoughts and feelings as being okay things to have. So, when I was invited to my first ever gay & lesbian dance I was pretty excited! Fucking terrified, but excited too.

After I was dropped off at the dance I took a deep breath and strode right into the building from the car. I figured that if I was going to do it, I needed to just get right in there. If I didn’t, I knew that I’d chicken out and leave. Once inside I sat alone at a table, looking around for members of my youth group. I was pretty early so none of them were there yet.

About 15 minutes after sitting down I was approached by a stocky gay man with a goatee in his mid to late twenties (he joked that he was closer to 30 than 20). He introduced himself and seemed very friendly, making small-talk with me so that I didn’t feel awkward or alone at my first gay dance event.

Initially, I was guarded. I didn’t tell him a lot about myself. But as he told me more about himself I eventually started to relax around him. I told him about how this was the first ever queer event that I had ever been to, that I was there alone, that I didn’t really know anybody in the community, that none of my friends knew that I was there, and that I wasn’t sure how I identified or where my attractions lied. He seemed to genuinely care, and told me all about how nervous, and confused, and scared he was the first time he went to a queer event too.

And then he put his hand on my thigh and started to caress me.

I felt my face go flush. I was light headed. I started shaking and sweating pretty heavily. But he just kept rubbing my leg all while looking around the room to make sure nobody saw what he was doing.

I have no idea why, but I didn’t say or do a fucking thing. I just sat there, shocked and upset as I felt his big, calloused, dry, dirty fucking hand fumble under the table to undo and unzip my pants.

The whole thing felt really surreal. At one point I must have snapped back to attention because I distinctly remember trying to move my chair away from him but that just made him act more aggressive. I could hear my boxers rip under the table as he pulled at them to get his big, fucking cold, hairy, bear hands on me. Nothing about it felt good. He just grabbed my penis and started to stroke and pull on it roughly. It hurt.

And he didn’t even fucking look at me while he did it. Not once. He just scanned the room, one hand firmly on my thigh to keep me sitting, the other aggressively squeezing and rubbing my flaccid, unaroused cock.

Eventually, a young woman who was helping set up decorations nearby seemed to notice that something was up cause she kinda started to hover near us and was staring at the guy intensely. I couldn’t even look at her after the first time our eyes briefly met. More than anything I felt really ashamed. I didn’t want her or ANYBODY looking at me right then. So I turned my head and closed my eyes.

He must’ve been startled though because out of nowhere he just completely pulled away from me. But just before running off he leaned in one last time and whispered for me to meet him in the bathroom where he would “suck me dry”. And then he was gone.

Just to reiterate:  this happened at my first ever LGBT dance, when I was 16-years-old, had JUST started to explore my gender and sexual identity in a healthy way, and this fucking cis gay dude nearly 10 years my senior held me firmly down to a chair with his hand in my lap as he assaulted me at a rickety collapsible table with a cheap, stained, musky smelling white cloth on it.

I don’t remember a lot of the details of what happened after he left, but I somehow made my way upstairs to a balcony area overlooking the dance floor. I stood there looking down for what felt like a pretty long time. He was down there, walking around, his neck craning about the crowd looking for something… or someone.

Eventually another queer youth group member found me and I stuck with them for the rest of the night. My abuser remained in my peripherals. Every time I thought he had moved on, I would catch him again out of the corner of my eyes looking over at me. But he never approached me again.

And then a really cute boy my own age started flirting with me and asked me to dance. I think part of me wanted to send a message to the fucker who assaulted me, because I was all over this other guy. We dirty danced song after song, our hands all over each other. I could feel him slowly get an erection against my lower back  and holy fuck, y’all… it got me HELLA hot. I got hard too and learned all about the wonders of grinding. Then we found a quite place to make out and I was feeling great until he asked to meet me in the bathroom where he’d suck my cock.

Now, with this guy I wanted that, BUT holy fucking shame spiral Batman… I kept seeing flashes of the goatee dude and then I felt like a freak, a perverted deviant for getting aroused with this other guy after all the other shit had just happened.

I was disgusted with myself, confused, scared, and just a fucking mess. To make matters worse, the young woman who had hovered around me at the table before, now saw me making out with this other guy and the look on her face was so fucking judgmental I thought I was going to die right there. So I ran out of the place and never ever went back to that queer youth support group ever again.

What followed were years of addictive, self-destructive, self-harming behaviors. When I was 17 I started hooking up with random men from the Internet. I’d sneak out of my basement bedroom window to meet these strangers in their car for oral sex. Looking back on it, I recognize how dangerous this was but I did it anyway and for the most part, save for a couple of really uncomfortable hookups, I had fun.

Most of my early twenties were then a blur of heavy drinking, smoking nearly two-packs of cigarettes a day, playing MMORPGs for hours on end, and generally isolating myself from most everybody else save for one or two others who would drink with me.

Ultimately, it wouldn’t be until my late twenties, early thirties that due to support from my partner Falon, a whole lot of emotional unpacking, and mental health treatment, I’d finally come into my own as a confident, queer, and non-binary person.

But I rarely ever talked about my abuser. Not even to my therapist. In fact, other than Falon, I only ever told one other person and he didn’t really offer a lot in the way of support. So, this has long remained one thing I’ve continued to bury, ignore, and hide away from.

Until this month, that is, as I have read countless posts from people I love and admired speaking out about their experiences of sexual assault.

Now I am too. It happened. I’m not alone. And to all those out there who are struggling with similar experiences in private, you are not alone either. I believe you.