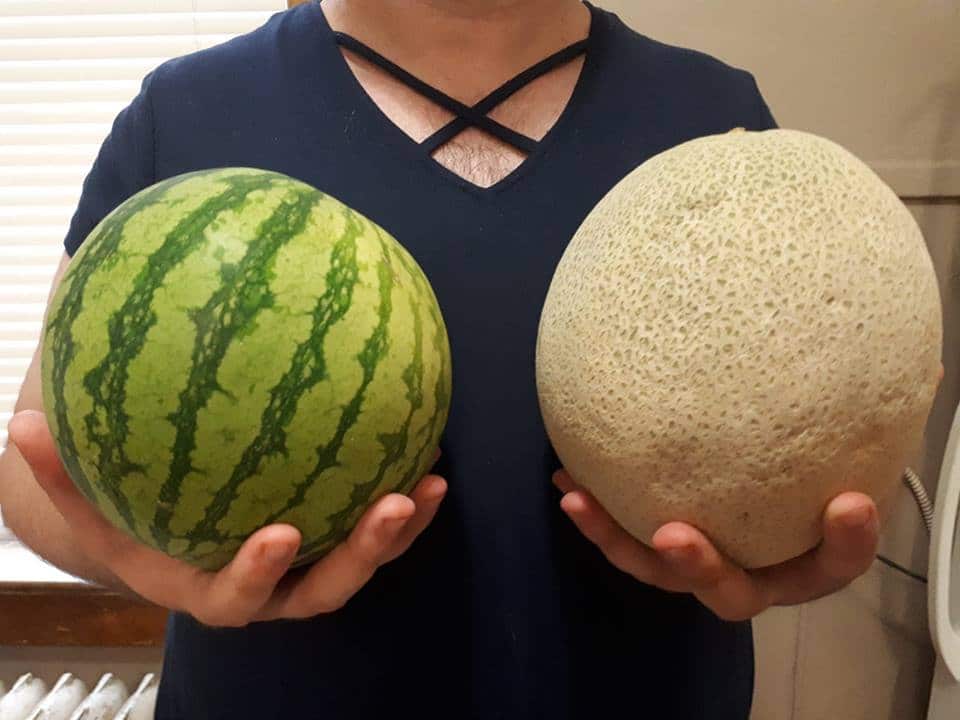 Ahhhh yeah, it’s that fucking time again! No seriously, it’s fucking time. Like, the time to fuck… things… cause it’s time for another installment of Mx Nillin Fucks!

Anyway, after I jerked off with a bunch of banana peels in May, a realization dawned on me: I never fucked the basics. I mean sure, attempting to get off with an apple pie was a hilarious throwback to American Pie and jamming my genitals into a pool noodle was a riot, but what about all the basic shit that internet forums have been recommending for decades? I’m talking a red solo cup with two wet sponges in it, socks, and a good ol’ fashioned melon with a hole cut in it.

Speaking of which, welcome to the eighth installment of this series, and the second official entry to Year Two!

I’m going lady balls deep into some cantaloupe, honeydew, and watermelon. You could say that I’m a… melon baller…

*Shrug* This is super subjective. I drove around my city to multiple stores and found them ranging in price from $2.99 to $5.79, so, I dunno, less than $10. Honestly, I wouldn’t pay more than say $3.99 for one. I mean, you ain’t eating these things, you’re fucking them.

Here’s the bit that takes a little more effort than I’d have liked… sure, most of this is gonna be “common sense”, but I don’t fucking have that… okay?

From room temperature, carefully cut your hole with a steak knife, measure it against your semi-erect, or erect, penis and alter as needed, then toss that delicious pleasure sphere into the microwave for about 30 seconds.

When you hear the ding, it’s business time.

Now, if you’re me then you didn’t do any of that. No, no. You kept them in the fridge for two days, you silly fuck, Nillin, then spontaneously decided it was time for an intimate fling with your fruity fuck orb. So rather than a smooth experience, you had to spend 20 minutes burst heating that cantaloupe for 30 second intervals, yelling at it because it’s fucking scalding on the outside, and freezing cold in the middle.

TIP: If this is you, skip the microwave, seriously. Cut the hole, turn on your tap to nice and warm water, and let it run inside your melon until you end up with a decent, consistent temperature. This is just better. So much better. Don’t be Nillin.

Well, the cantaloupe and honeydew were… okay. Problem is that they simply don’t have a lot in them. They’re pretty hollow, so, while penetrating it felt not the worst, it was never going to “get me there”… if you know what I mean.

I’m the type of person who requires a lot of stimulation on my girl cock for me to ejaculate. I can’t just stick my cock into anything and just ejaculate after humping it for a bit. I need some actual, physical substance to what I’m fucking. I need to feel it ALL around my girl cock including it’s head, frenulum, and shaft.

But you’re not going to get a lot of stimulation on most of that from fucking a cantaloupe or honeydew. That being said, if you cut your hole JUST right (as in not to wide and not too narrow) you can actually get a decent amount of suction going on in them and that definitely is a plus.

That watermelon though… unf! So much better. Being significantly more dense it really envelops your entire penis and provides a lot of unique texture inside. Like, I could definitely see maybe ejaculating in a watermelon, there is a lot of potential there.

Heatwave and awkward handling aside though… they just ain’t anything to write home about, you know? Not that I would recommend writing home about them.

Seriously, don’t do that. That’s not cool, your mom doesn’t deserve that, she’s a fucking saint.

I give melons, as a whole, 5 outta 10! Middle of the fucking road there.

Miles above apple pie, Jell-O, and a pool noodle, but not as good as peanut butter & jelly sandwiches, plushies, banana peels, or a silicone sex toy modeled off your own genitals.

Hope you’re all having a fabulous summer!