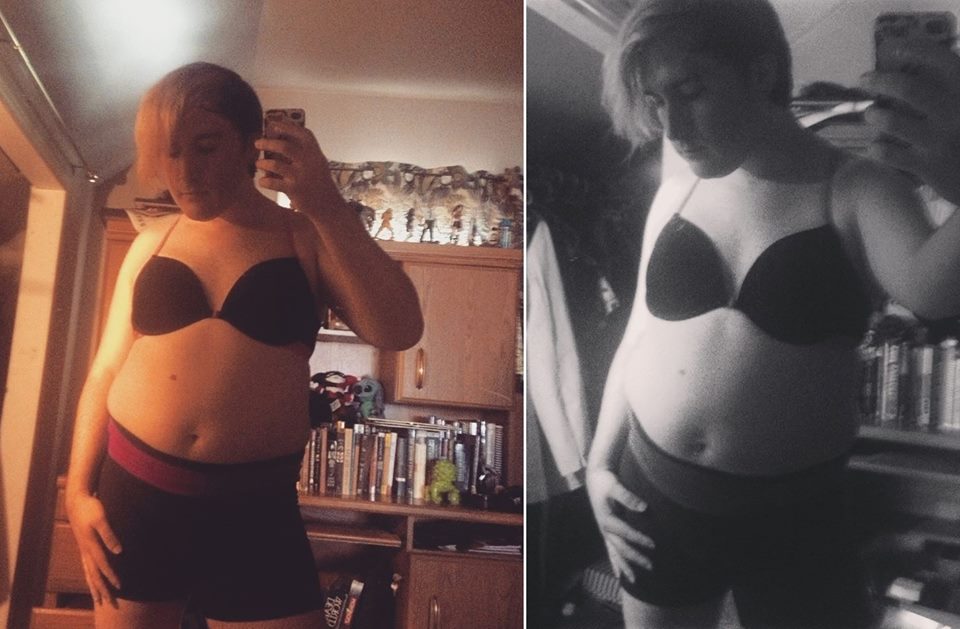 [CW: one NSFW image and talk of dysphoria, depression, and thoughts of self-harm]

After coming out as queer and trans in late 2013, following years of struggling with my identity in secret, I was in the best shape of my adult life. Just over two-years prior I was at 225 lbs, chain smoking, binge eating and heavily drinking as I battled heavy depression, suicidal thoughts, and internalized queerphobia.

Mostly it was a miserable fucking haze of hating myself and not understanding any of the shit I was experiencing, so, I just ran from it.

But then I moved to my hometown and after a couple years of roller derby [Note: and a starvation diet that I do NOT recommend to anybody] I was at 155 lbs, living with my supportive partner, and felt excited to finally express my gender and sexuality out in the open. No more sneaky crossdressing. No more self-degrading whenever I had thoughts of queer sex. No more crying in shame as I looked at myself in the mirror wearing a cute dress. I was gonna go at this new found exploratory phase hard, without shame or fear, and in the ways that made me feel most comfortable and happy.

Problem was that my chest was flat as a fucking board, and at that time I hated it. Folks seemed keen to recommend that I start HRT, however, living in a small Saskatchewan town amongst anti-trans, and generally anti-queer, doctors made that pretty inaccessible.

Add in that I didn’t yet have my driver’s license and that the pervasive, bullshit gatekeeping process to begin medical transition required travel outside of my hometown to various “specialists”, who I would then have to convince that I was “trans enough” for HRT. That’s right, trans people basically have to somehow prove to mostly cishet doctors that we’re totally not delusional and we totally do fit their very narrow, binarist DSM-V definitions for somebody experiencing “gender dysphoria”. It’s essentially non-trans people deciding whether or not trans people can transition safely and with medical coverage.

For a lot of folks hoping to just get started, this gatekeeping usually involves forcing yourself to stick to the “acceptable trans person” narrative pumped out by Hollywood, news media, and pop culture trans peeps. You’ll have to memorize a script that proves you are experiencing dysphoria in a certain way, that you are experiencing profound urges to be rid of your genitals, and that you have a strong desire to be the other binary gender. Any deviation from that, such as wanting to keep your genitalia, identifying as anything but a transwoman or transman, or, exhibiting some form of gender nonconformity/fluidity, and you could be denied HRT.

You basically have to mimic other transwomen from pop culture to most doctors and be as stereotypically masculine or feminine as possible.

And that’s exactly what I did. 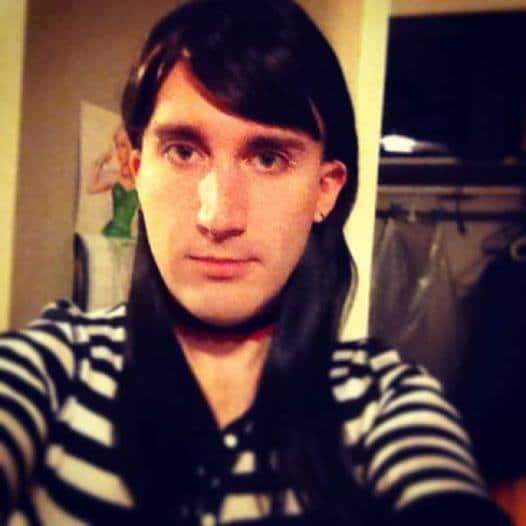 I bought everything I thought I needed to feel better and look more femme. I bought dresses, femme clothes, padded bras, and even a long, dark wig. Yet no matter what I put on me, I felt that my flat, hairy chest somehow betrayed my authenticity. Chock full of imposter syndrome, and with HRT being out of the question for the foreseeable future, and bra inserts just not actually making me feel any better, I felt like there weren’t a lot of options.

Before long, I started to notice more cleavage when I put on a push up bra, and that felt REALLY good. I convinced myself this was positive boob growth and that it was a good idea to put on weight so that when I eventually did start HRT I’d have the fat to redistribute to my chest, hips, and ass. So, I just ate more, and ignored all of the other signs of unhealthy weight gain because “yay long-term goals and at-least-kinda-tits!”

And if I thought my dysphoria was bad before putting on any weight, it is actually FAR worse now.

My stomach once again hangs out like a big saggy “beer belly”. My love handles protrude outward, making wearing any tight clothing completely out of the question for me. My “breasts”, which I at one time thought would make me feel better, look no different than they did the last time I was this big.

I’m getting misgendered literally 100% of the time and my experiences with street harassment have skyrocketed as locals oogle at, laugh at, film, threaten, and insult the chubby, hairy “dude” in a skirt or dress.

On top of it, I run out of breath a lot faster, more often, and I actually struggle to get up out of bed or off the couch; plus, my allergies have been even shittier than usual. All around, I ain’t feeling very well.

In fact, I haven’t taken any nudes or lewds in months because of it.

Weight fluctuation throughout life can be a stressful experiences as is without adding in dysphoria and social pressure to “pass” on top of it. So, for anyone out there going through similar stuff: I hear you, I see you, and I feel you.

Now this is normally the part of the post where I’m supposed to say that regardless of all that, I love my body; but that would be dishonest. I don’t, and I long to get back to that brief time after coming out when I was this small, cute androbabe who didn’t give a fuck about what anyone thought about me. Somewhere along the way that changed, and I fucking hate it.

Why the fuck am I trying to “pass” again? Why am I trying to make myself appealing to people who are actively making my life a living hell, and likely are never going to accept me for who I am?

I don’t think I even fucking want to be on HRT. I never did before. Yet somehow the idea got into my head that in order to be happy with my transition that’s what I had to do.

So these are the things that I’m telling myself as I work through this:

I acknowledge that I have put on weight and that I feel unhappy and unhealthy as a result.

I resolve to continue loving myself and practicing affirmative self-care as I work on losing that weight.

And I wholly reject anyone else’s fucking opinion of my body, my transition, my experiences, my identity, or my appearance.