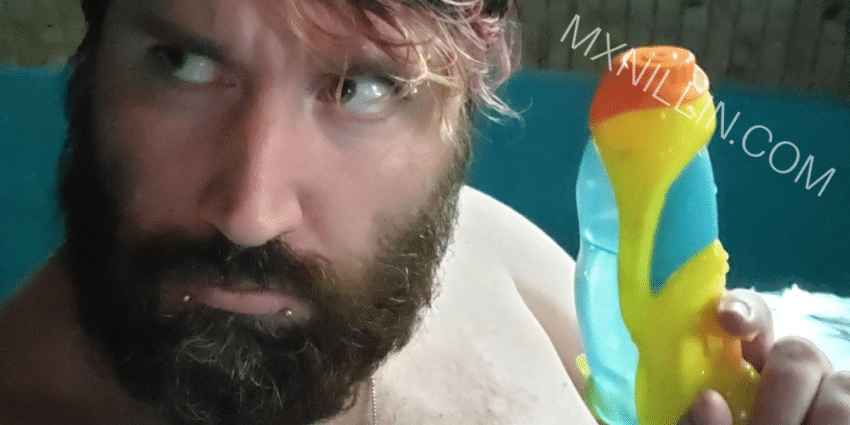 Look, I’m a fucking hairy queer. Always have been. My chest, legs, arms, belly, butt, all super hairy and for years that caused me a great deal of grief. Why? Unfortunately I had let passing pressure convince me that the only way for me to look, and be accepted, as trans was to constantly shave my hair. Sadly, this was affirmed by a lot of cis folks who would give me a lot of unsolicited advice about how to do my make-up, or my hair, and make comments on what I could be wearing to look “even prettier”. I’m sure they were well meaning but it still really fucking sucked and created a deep insecurity in me about my body for many, many years after coming out.

Fact is that there’s simply no fucking way for me to keep up with it all. Shaving for me often results in razor burn, ingrown hairs, and I genuinely just fucking hate doing it. I’m not interested in waxing at all and the price tag can be real steep. And laser hair removal is just overall expensive as fuck and not gonna fucking happen in any measurable way. Besides, I hated that I had to put so much maintenance into my body, and the hair that covers it, in order for others to see me as somehow more valid in my transness. So I gave up on all of that bullshit a while ago.

My beard was another story though. That I felt like I could reasonably control, and I did my best to shave it as often as possible. Though even then I often did it to excess, sometimes shaving so much I caused razor burn on my face or nicked myself all over from being too careless with the blades. I just could never seem to get my shave close enough… no matter how much I tried, there were always little hairs that persisted. There was always bits of peach fuzz and stubble I could see and feel. So, I often pushed it and in the process hurt myself.

But then the pandemic hit and I found myself stuck in a series of extremely unhealthy living conditions that led to a tremendous decline in my mental health and wellness. Shit like personal hygiene, self-care, and positive body feels, went out the widow. I put on weight, got sick from a bad mouth infection from a series of untreated cavities, started to develop rough hemorrhoids from stress shitting all of the time, I wasn’t showering or washing my clothes much, was breaking out all over, not having a lot of sex or masturbating at times, and yep, I stopped fucking shaving. 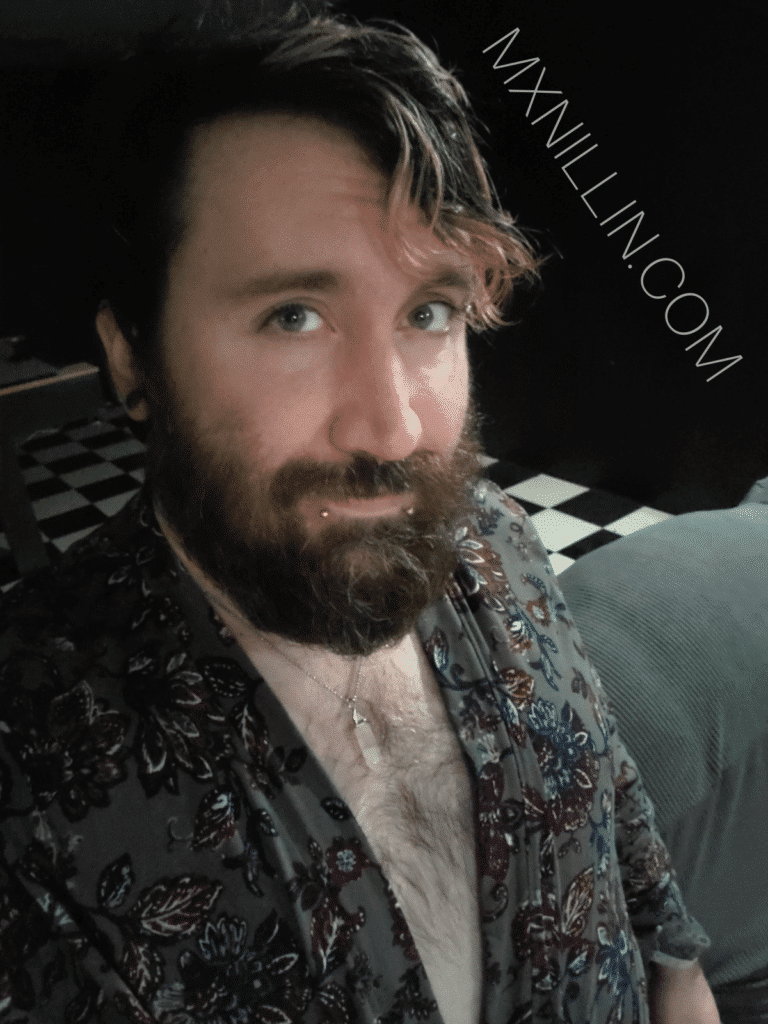 While in the past the presence of facial hair for me has been indicative of my declining mental health, meaning the thicker the beard the worst I was doing, this time things were a little different… despite the fact that, yes, my new beard technically only started to get as floofy as it was because I lacked the executive function and energy to shave it.

I also didn’t want  to shave it.

Now, for those who know me this is a pretty big fucking deal. One of the things that’s made me feel most dysphoric in the past is that the more facial hair I had, the more likely I was going to be misgendered by everyone. It didn’t matter if I was in a dress, with shaved legs, long hair, make-up, and carrying a purse, if there was even a little bit of stubble visible than everyone I encountered outside of my home was gonna fucking “sir” me and shit. that always made me feel really unsafe and unhappy presenting as femme.

Since all the lockdowns have started though, that’s not happening as much. While not going out or seeing my partners and friends very often has been difficult, I’ve had a lot of time to get to know myself again. A big part of that has included me focusing on exploring my relationship with my body and, in particular, my body hair. With there almost being no strangers around to misgender me or treat me like I’m a “man”, I’ve actually experienced a huge shift in my overall perspective of my body.

It’s notable how a decrease in other people gendering you against your will allows you the room to better understand yourself and love your body, eh?

Whereas before me having facial hair was a negative and lead to an increase of misgendering and street harassment, now it just made me feel cute and queer as fuck! The change in perspective has honestly been fucking revolutionary for me. Whether I’m lounging around in my housecoat, popping out in a cute summer dress, taking it easy in a some graphic tees, or cuddling naked with a partner, the beard has been good! It’s actually made me somehow feel even more comfortable in my sexuality and in my body, even if I’m still struggling to figure out other aspects of my gender.

I particularly love that it’s a way for me to re-frame something that’s typically felt like a representation of my masculinity, which I avoided as much as I possible could early on in my coming out. Not that I’m leaning into the masculine very much now either, more that I’m not shying away from it and am instead exploring it under a decidedly more queer and non-binary lens. My beard make me feel elegant. It’s warm, cozy, and soft.

Here’s hoping that once I’m let back out into the world, rocking my new bearded look and positive sense of self, it’s not ruined too quickly…

In the meantime though, I’m feeling affirmed and loving my face floof. 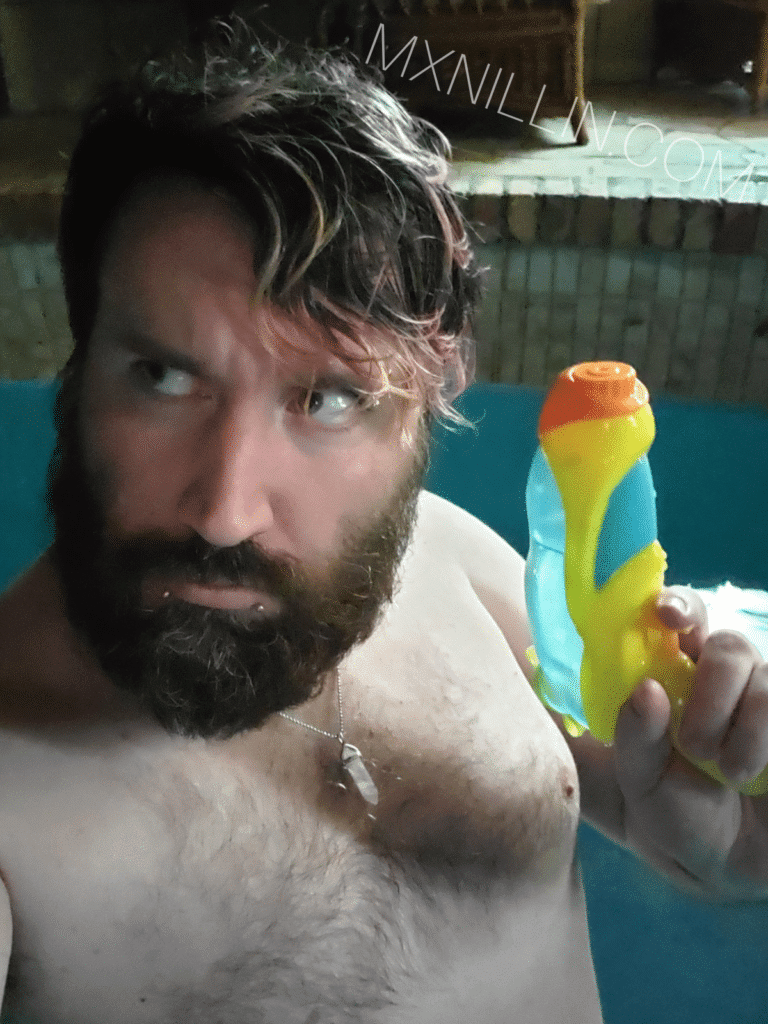