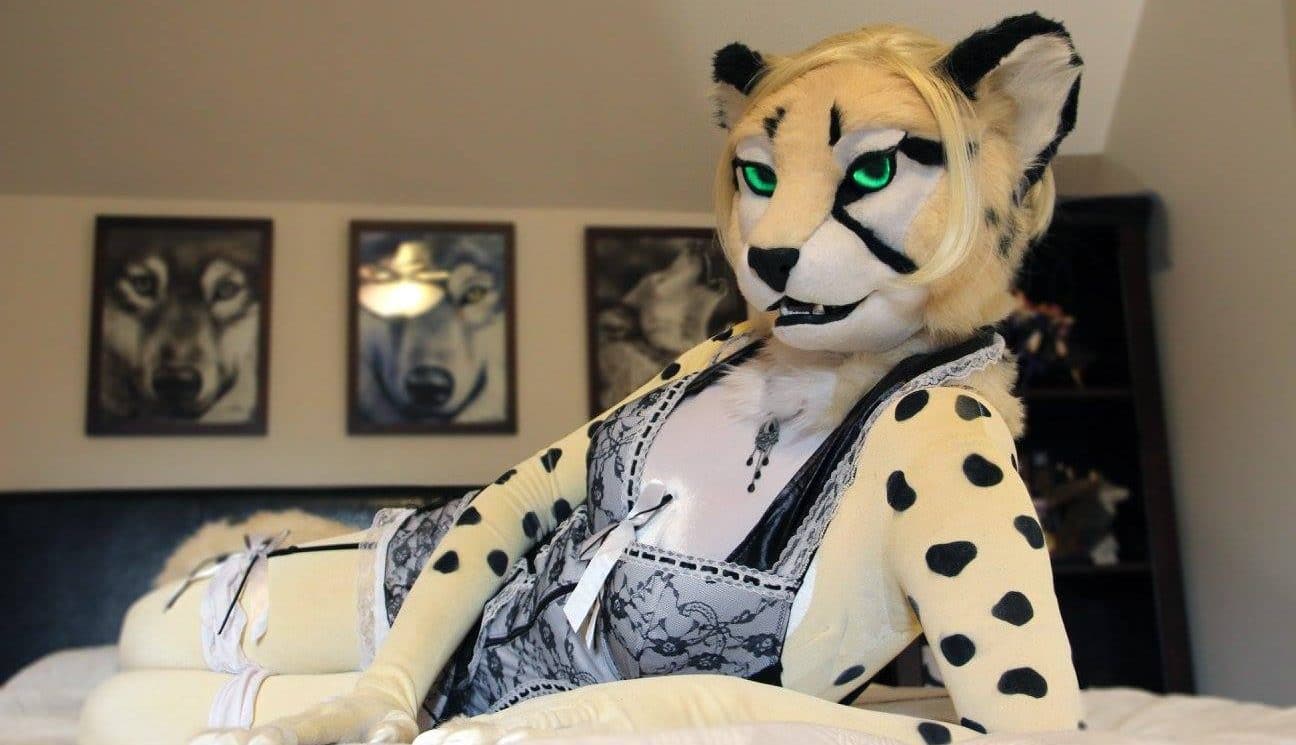 But this past year I’ve really started to embrace my inner furry.

Next thing I knew, I found myself browsing pet play and costume piece sites like Kitten’s Playpen, and then there I was ordering my first cat tail and ears set (which will hopefully be on its way to me soon!). Overall, it has all been pretty great and I’m having fun starting to even consider a fursona for myself.

So, I really wanted to talk to another furry, possibly a fursuiter [a person who owns and typically wears animal based costumes associated with the furry fandom].

Enter: Rhea Algarin, a well known furry and fursuiter, who I first noticed in a photo gallery shared on the World of Furries facebook page. Reaching out to her allowed me the tremendous opportunity to learn more about furries, unpack my own baggage about being a furry myself, and share all of that with you. I hope that you enjoy learning from Rhea as much as I have!

Furries and their Fursonas

So, what exactly are furries? While a number of definitions exist online [here’s a really great one] everybody who identifies as a furry seems to have their own personal idea of what that precisely means. Rhea describes this differentiation as a diverse range of understanding, “on one side all you really need to have to be a ‘furry’ is an interest and love for anthropomorphic animals. Then there is the group that feel much more akin to the animals and feel they have a spiritual connection with them.”

As such, the involvement that people have with the community seems to stretch all the way from a casual interest in anthropomorphic characters [non-human beings that are presented with human characteristics] and art to Otherkin identities, which is loosely defined on the Otherkin Community Wiki as: “people who identify in some internal way as non-human.”

Regardless of where somebody seems to find themselves in that range, one consistent seems to be the development of, or an interest in, a fursona. What is a fursona, you ask? Luckily, that’s a little less ambiguously defined. “[Your] fursona is the character that you have created to represent yourself within the furry community,” explained Rhea. “It is your furry side and how you like to be known to others. Some people have and stick to one fursona (like me) and others have lots that they change between.”

NOTE: there are also those who are more interested in “nekomimi/catgirl” personas [mostly human characters with feline/cat-like ears and/or tails], or “ferals” [characters or fursonas that carry almost no human traits at all].

Feeling a little lost? It’s okay, I was too until recently. I think one of the best ways to start wrapping your head around it is to listen to furries themselves.

Rhea first learned about the furry community back while she was attending college in the latter half of the 90s. It was around this time that she also went to Anthrocon‘s (“the world’s largest convention for those fascinated with anthropomorphics“) inaugural gathering as her first official convention event. “I [had] always been a furry but I didn’t know there was a name for it, and others like that, until then. It was amazing, and a little intimidating at the time. There were a lot of people in these fursuits that looked amazing; it was a lot to take in at first but I loved seeing it all.”

Really, it shouldn’t be surprising that Rhea had found herself interested in anthropomorphism long before discovering furries. Cultures all around the world have been fascinated with part-human-part-animal beings, or human-like animals, or animal-like-humans, for a VERY long time. I mean, Greek mythology is absolutely bustling with half-human-half-animal creatures and gods such as centaur, satyr, minotaur, harpy, and Medusa/gorgon. Ancient Egypt had it’s fascination with bird headed Gods such as Horus and Ra, as well as the jackal headed Anubis.

Hell, even pop culture and Hollywood loves furries too. Just look at Disney. The entire foundation of that corporation is built on a foundation of furries like Mickey & Minnie Mouse, Donald & Daisy Duck, Scrooge McDuck, Darkwing Duck, Bernard & Miss Bianca [The Rescuers], Chip & Dale, Gadget, Launchpad McQuack, Pete, Robin Hood, all of them; anthropomorphic animals. Many of them; ducks…

Rhea’s fursona was taken from a White Wolf tabletop RPG game she was playing when she first learned about the fandom. “I was playing Rhea at the time, and totally loved her, and thought she would be a great fit. I don’t think I intended her to be permanent at the time, but she just became a part of me and who I am over time… She has a ton of backstory, far more than I could easily get into here. But to sum it up she is a Magical Warrior Priestess of Gaia. She fights corruption to save the world and its people. She is a very kind and gentle, person but strong in her resolve. She is a leader and one who always tries to do her best to help. And isn’t above being a bit flirty at times because she likes to bring a smile to people’s faces.”

The longer I spent talking with Rhea, the more I realized that her fursona meant so much more than just some roleplay fun. “Rhea has a very special meaning to me and I do feel extremely close to the cheetahs, and have a pretty feline personality. While yes, I’m obviously human, I am of the mindset that if technology existed I would become my avatar without giving it a second thought.”

“[Rhea is] polite, and graceful. Sometimes playful, it can also depend on what outfit I have on… Perhaps you could say she is an ideal that I hold myself too. In a lot of ways she is who I strive to more closely become. But at the same time, we are one in the same. She is an aspect of myself, and one I’d like to be more like. Having her and being her has helped me to become a better person, I think.”

Once Rhea went to her first con, she found herself quickly invited into a community that didn’t judge or stigmatize her for her furry interests like everyone else did. “Furries are pretty supportive, I think. Sure there are still going to have the negative people that any group will have but it’s been my experience by and large that most furries are much more accepting then most other groups seem to be. And that helped me to be comfortable with the fursuiting.” 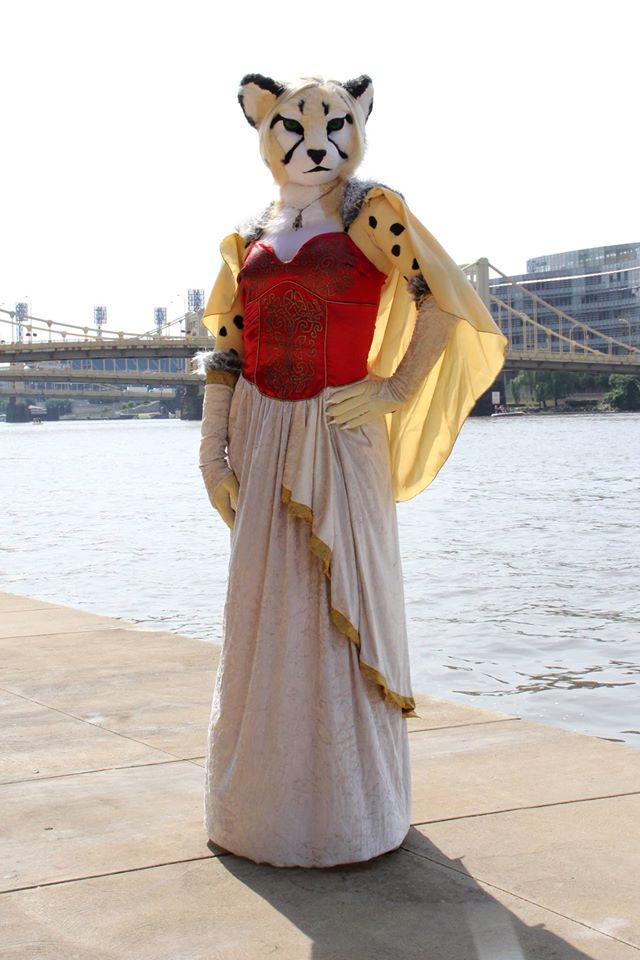 Speaking of Rhea’s suit, it was built by her roommate, and fellow furry, Astaira Naira.  It’s made of stretch velvet and has had many revisions over the years. In an early version, Rhea was actually covered in fur but once the heat of being in there got unbearable she finally asked for a lighter version, which is what you see today.  “It’s so much cooler! The other thing I liked about this one is that it lets me have suits and more jewelry options. I really do like the style and look [too], I think it gives a bit more realism.”

But realism isn’t necessarily the end all be all of a great fursuit. In fact, Rhea believes what makes a truly outstanding fursuit is balance. “Here’s the thing, for me, the trick to a good fursuit isn’t how realistic to the animal you get but how good you are at blending human and animal traits together, as well as keeping to your chosen animal. It’s how you blend those two aspects that get you a good suit.”

In the end though, it’s really up to the individual how they develop their fursona and whether they go for a full fursuit, just some fur/pet play accessories, or nothing at all. For some, the community and creativity simply isn’t of any interest to them, they’re just there for the bunny babes and sexy fox folk banging each other. And you know what? That’s cool too.

But what is it precisely that people find sexy about furries? Well, like most other attractions or sexual interests the explanation isn’t all that exact.

“Oh my goodness, that’s like asking ‘what’s pretty about this flower?’ Or, what do you find attractive about one girl over another,” said Rhea. “Furries are just sexy to me. There is something about the mix of animals, creatures, and human that I find alluring. The fur, wings, tails… I just do.”

Now, if you’ll excuse me, I’m going to go put on my bunny ears and collar while I drool over some hot furs.