At least not in any formal or traditional way. Birthdays are just really fucking hard, y’all! Over the last few years, every single time July swings around I find myself starting to feel more and more anxious, often verging onto panic, and time has continuously shown it to be for good reason.

In 2020, we were on the edge of pandemic lockdown and I was in the midst of dealing with an increasingly hostile and uncomfortable living situation, as well as experiences with emotional manipulation and abuse from an increasingly unhealthy relationship. During my actual birthday a lot of uncomfortable interpersonal stuff happened resulting in me generally feeling very stressed and upset.

2021 brought me the emotional trauma of having just separated from my spouse, and fleeing two back to back living situations in which I was struggling through emotional and verbal abuse, as well as some sexual coercion. I was hyper-vigilant, overwhelmed, tuned out, and trying to mask it all rather poorly.

This year, which I’d hoped would be much better, turned out to be the worst yet. Leading up to my birthday were two breakups, two de-escalations (one of which came out of left field), and one shattered connection due to miscommunication and high emotions. Some were my choice, others were natural ends to months of toxicity, stress, and poor relationship conditions. Then, the day after my birthday, when I was just starting to let my emotional guard down a little, I had yet another breakup occur.

It wasn’t one that I wanted to happen, nor suspected would, and it really sucked. 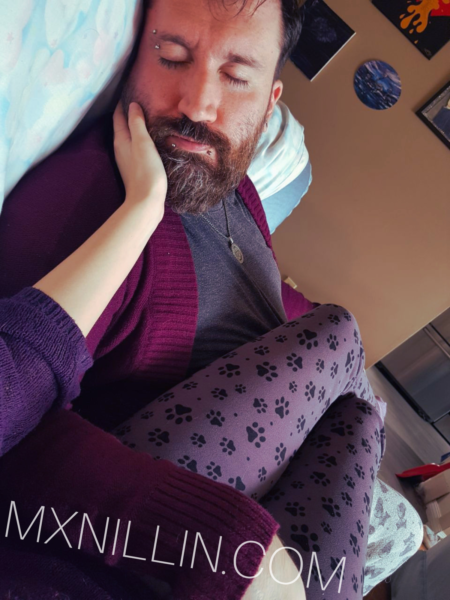 Don’t get me wrong, I had a lot of wonderful support from my partners Fen and Verne, but the sheer amount of rejection that’s happened as of late has had me veering in and out of breakdown mode for weeks. And the hyper-vigilance is back full-force. I had a small gathering shortly after my birthday with a handful of people that felt relatively nice, but I still struggled a great deal with feeling heartbroken, abandoned, insecure, and disconnected from the moment.

Not that birthdays were necessarily better for me growing up either. Overall they were very anxious times that I struggled immensely with socialization, expectations, sensory overload, and even addictions around. When I was younger I often found myself mostly dissociating through parties, getting very quiet and wanting them to pass.

When I got older I found them to be anxiety inducing, uncomfortable, and I didn’t know how to act at them. Everyone kept expecting me to be excited, to get pumped up, to be happy, but I wasn’t and I couldn’t force it no matter how hard I tried. I had depression and anxiety, as well as undiagnosed autism and ADHD, and masking was impossible. Further, it was all made worse by all these expectations of my friends and family to make a big deal out of it. Hell, half the time that I did try to plan anything most people didn’t show up either. I get it, life keeps us busy but it still sucked and ultimately just led to me feeling worse when I couldn’t spend the time I was already anxious about with the people I cared about.

I mean, if that’s what you want, then cool! But I’m an autistic introvert and it’s taken me until this year to realize that my sensory issues, panic attacks, and anxiety around birthday parties is legit and not something to feel guilty about or try to pressure myself into just ignoring.

Speaking with my counsellor recently, she told me about how her best birthday of the last decade was in 2020, in the midst of the pandemic, because for the first time in years she was able to just spend it her way, for herself, with no expectations from anyone else about who she should invite, when it should, be how she should feel, and all that crap that typically surrounds it. Honestly, that sounded great and really helped me re-focus a lot of what I’ve been feeling.

Between my history of birthday month trauma, and my general mental health struggles with birthday parties, planning, and socializing, I think I’m going to try something different next year: I’m not going to have one. Instead, I’m going to buy myself some gifts, ask my friends for some nudes, stay home, order in, and just vedge out with my partners.

Interestingly, I kind of feel the same about holidays too, especially Easter, Thanksgiving, and Christmas. I was disowned by my family nearly nine years ago now, shortly after I started to come out as queer and trans in 2013. It was a devastating experience that I still haven’t fully “recovered” from. I don’t even know that I ever will. Since then I’ve found any and all holiday times to be very stressful and sad as I’m constantly bombarded with imagery of happy cishet families celebrating the holidays and safe and loving and warm and happy. Seeing it also reflected in my social media feeds just fills me with bitterness and sadness.

It just sucks that there’s a lot wrapped in all of these events framed with Christian influenced traditional family structures and values.

And maybe that’s it right there, that’s what all of this is about. Tradition. Cisnormative, heteronormative, and often ableist, tradition with all of the unreasonable, suffocating expectations attached. Be it a birthday or family dinner, I think that this next year needs to be partially about me redefining and reclaiming all of that for myself in whatever ways feel best for me.

I guess I just need something to give.